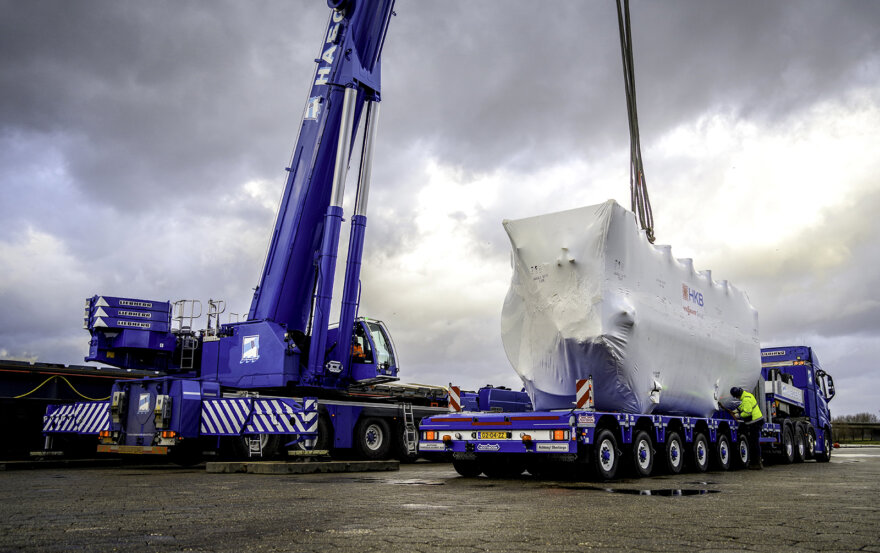 For the transport of crane ballast within the 10-tonne legislative limit Nooteboom offers two ideal transport solutions: The flatbed Ballasttrailer with counter-steering and the latest Manoovr Ballasttrailer. Since the introduction of the 6-axle Manoovr Ballasttrailer in the middle of last year an increasing number of crane hire companies are opting for the Manoovr instead of the traditional flatbed Ballasttrailer. One of the main considerations for choosing the MPL-97-06 Ballasttrailer is the low load floor of 780mm, which makes it safer when working at height. Other important reasons are the higher axle load of 12 t/axle, the suspension stroke of 500mm and the large steering angle of 60 degrees, all owing to the fact that the trailer is equipped with pendle axles.

Perfect match
The Nooteboom Manoovr Ballasttrailer is the ideal transport solution for the transport of crane ballast and crane parts of the Liebherr LTM 1450. This is mainly due to the size of the base plate (7.71m) of the LTM1450, whereby from now on the ballast is positioned underneath the base plate. That’s why most crane hire companies who have recently added the LTM1450 to their fleet have chosen the Manoovr Ballasttrailer as the transport solution for their crane parts.

OVB-95-07 Ballasttrailer
Four years ago Nooteboom developed the new 7-axle Ballasttrailer with countersteering. In spite of the fact that axle loads were reduced from 12 to 10 tonnes Nooteboom managed to keep the load capacity of almost 70 tonnes on a par with the previous version. As a result the load capacity can be fully exploited within the 100-tonne network that has come into force in the Netherlands. During the past few years dozens of crane hire companies throughout Europe have added this Ballasttrailer to their fleet because of its high load capacity, low maintenance costs and outstanding manoeuvrability due to a unique counter steering system.

MPL-97-06 Ballasttrailer
With its ultra-low load floor and 12-tonne pendle axles it’s the Manoovr Ballasttrailer that increasingly takes the place of the flatbed OVB-95-07. The Manoovr has 12 tonnes per axle line anywhere in Europe. The permissible maximum weight on the axle assembly of the 6-axle MPL-97-06 is 72 tonnes. This is 2 tonnes more than on the 7-axle axle assembly of the Ballasttrailer with 10 tonnes per axle. This allows for a better weight distribution as it will be easier to distribute the ballast evenly across the load floor. 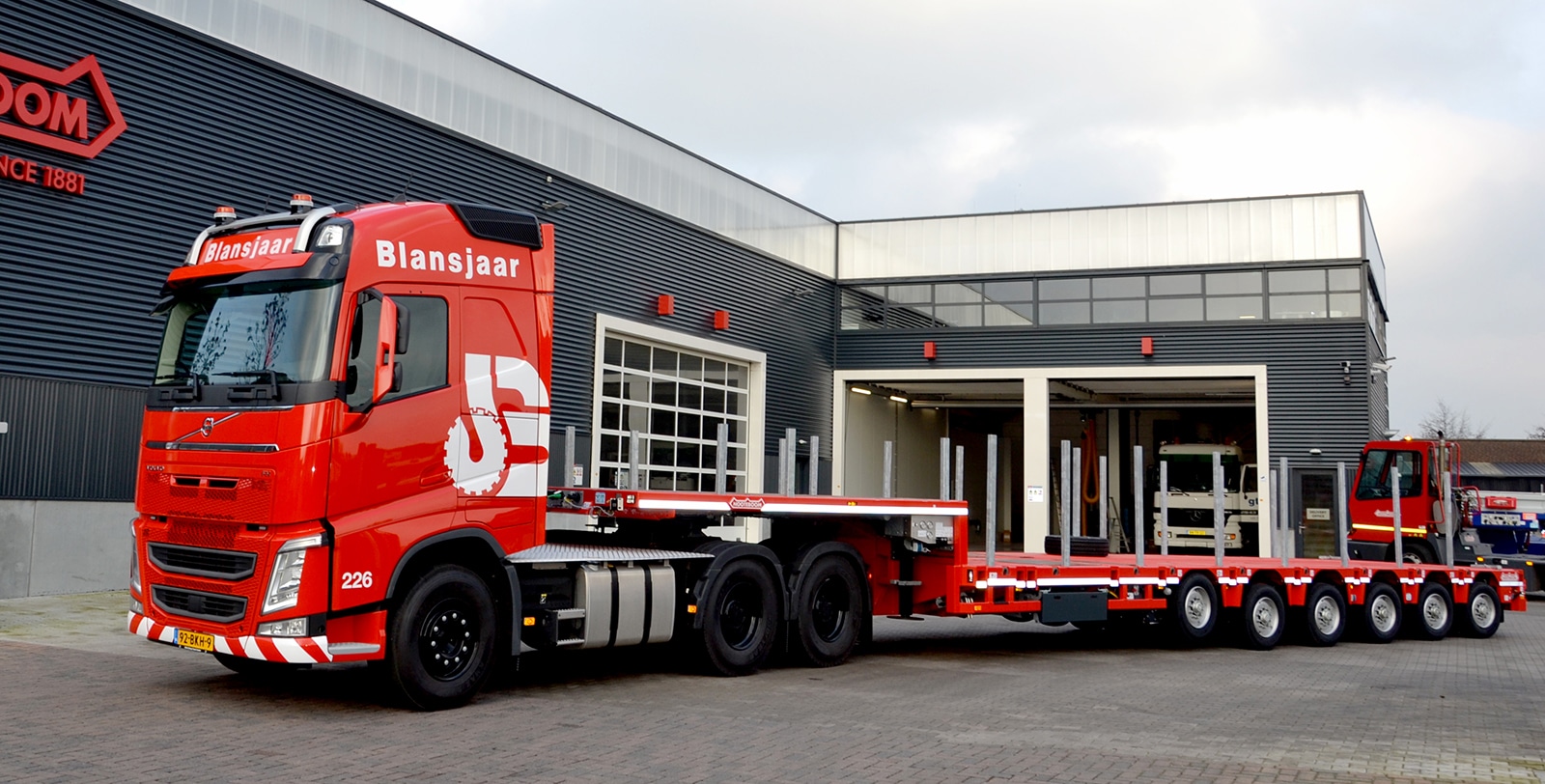 The shorter combination makes it easier to manoeuvre with the Manoovr on building sites. Combined with a 4-axle tractor it is even possible to transport ballast as well as crane parts with a 5-axle Manoovr, within the 100 tonnes gross train weight. Another big advantage is the low load floor, which makes it possible to safely work on the trailer floor.

But the Manoovr has even more advantages for the crane hire companies. Because the load floor is about half a metre lower than a flatbed Ballasttrailer, the ballast and boom sections can be loaded on top of one another. Flexibility is the magic word of the Manoovr. Today parts of a crane, tomorrow a heavy crawler crane and the day after tomorrow a steel structure: the Manoovr Ballasttrailer is ideal for an extremely wide range of transport assignments.

Haegens Kraanverhuur
Haegens Kraanverhuur was the first crane hire company to take delivery of the LTM1450 and they also opted for the Manoovr MPL-97-06. As a transport solution for crane parts and crane ballast, of course, but also for all kinds of other loads.
_______

Featured image: Haegens Kraanverhuur was the first crane hire company to take delivery of the LTM1450 and they also chose the multifunctional Manoovr Ballasttrailer. In the picture above this MPL-97-06 is used to transport a 64-tonne heavy industrial boiler of HKB Ketelbouw.

Inbedded image: Most crane hire companies that have added the LTM1450 to their crane fleet, such as Dutch crane company Blansjaar, opted for the Manoovr Ballasttrailer.