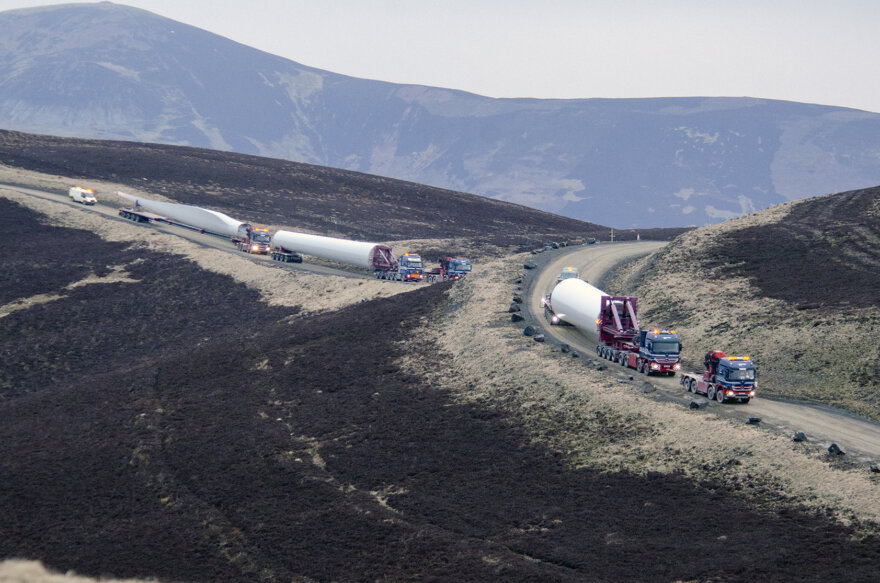 Mammoet delivered the last wind turbine components for the extension of the Clyde Wind Farm situated near Abbington, Scotland. Energy supplier SSE is currently extending the existing 152 turbine wind farm with an additional 54 turbines. Mammoet was responsible for the transportation of all the turbine components during the construction of the extension that will be finished later this year.

Complex terrain
Mammoet’s scope of work consisted of the transport of 584 components and 125 containers across 60 kilometres from the port of Glasgow to the site. The last part of the route was particularly complex terrain. As the client was meet with challenging inclines up to 14% over a 22-kilometre long site road, Mammoet called to the scene 8×8 individual-wheel drive pulling units to pull the trucks up the steep hills. Thus ensuring efficient transport of the components weighing up to 87 tons and with lengths up to 49 meters.

Ensuring no environmental impact
The hills on which the extension of the wind farm is situated are part of a drinking water capture area. Mammoet operated with extreme caution. All vehicles were equipped with anti-spill kits and all of the staff received special training to react instantaneously and appropriately to events with environmental impact.

Outstanding safety performance
The entire nine-month project was executed without any lost-time incidents or injuries “The Mammoet Team delivered an outstanding performance,” says Heinrich Larsen, Site Manager at Siemens Wind Power, “They always responded quickly with corrective solutions to any safety concern as soon as it was recognised.”