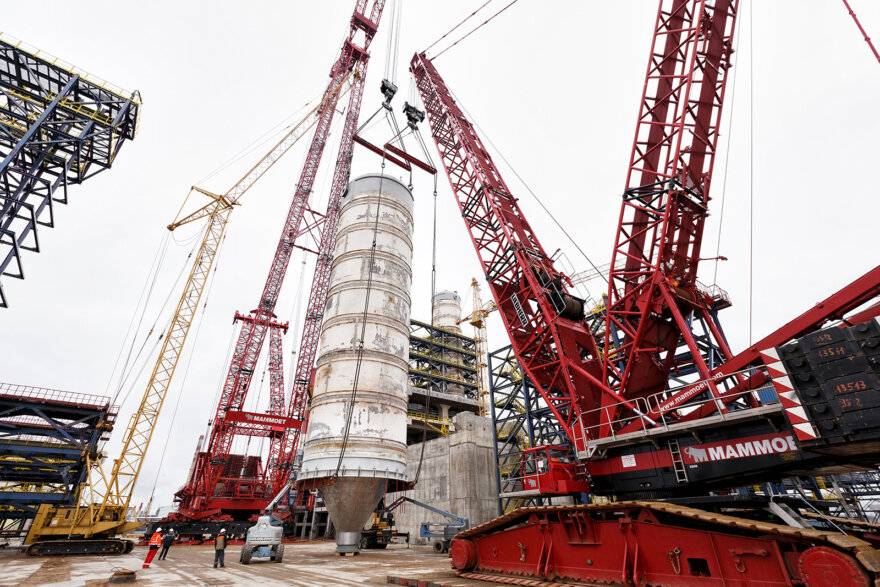 Mammoet Russia performed the transport and installation of oversized components and metalwork units for the construction project of a delayed coker unit at JSC “Naftan” in Novopolotsk, Republic of Belarus. The work included five modules of preassembled metal works and two coke drums

OJSC “Naftan” is a large petrochemical complex which produces various types of fuels, lube oils and bitumen, aromatic hydrocarbons and petrochemicals. Since 2011 an expansion program is being implemented at the site, after which refining output will increase to 12 million tons per year, due to a large-scale production modernisation that increases refining depth to 92%.

Recently, Mammoet Russia assembled the last element of the metal structure, which brought the plant to a record height of 113 meters for the technological facilities in Belarus. The heaviest unit weighed 365 tons, and the coke drums 450 tons. Mammoet’s in-house developed ring crane, the PTC 35 DS, carried out the lifting operations. Its capacity, small footprint, long reach and versatility enabled to work well within the limited area on-site and use the available space as efficiently as possible. Through this crane, with a  lifting capacity of up to 1,600 metric tons and a reach up to 120 meters, the number of lifting operations was reduced to nine and the project schedule as a whole was reduced by several months.