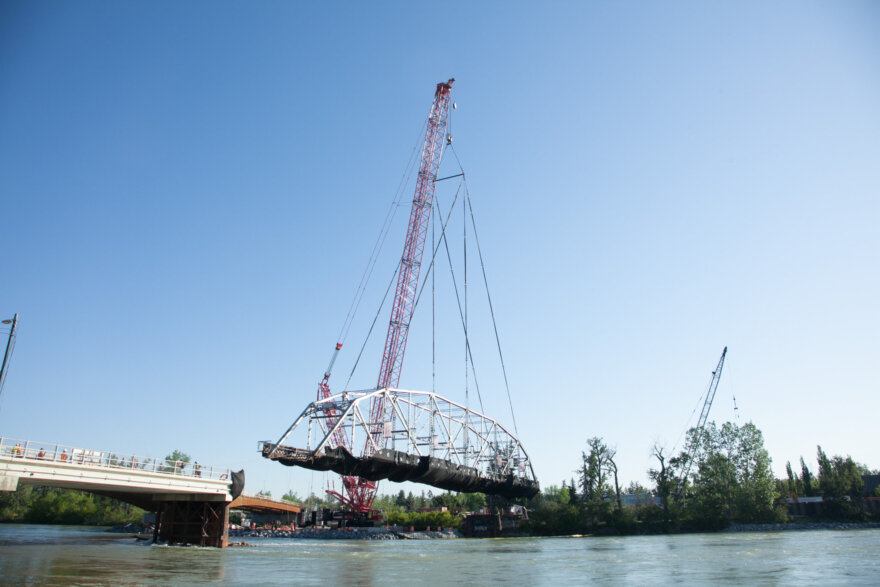 Mammoet successfully lifted and removed the historical 12th Street bridge from its foundation in Calgary. The bridge, built in 1908, spanned the Bow River and was removed due to its age and deteriorated condition. Weather delayed the original lift schedule, but when all cleared, the bridge was removed in approximately 45 minutes and set safely down in an adjacent area to be readied for demolition. Adjacent to the old bridge, a new 12th Street bridge is under construction to maintain this important traffic and pedestrian link. Scheduled opening is due in the 4th quarter of 2017.

The primary engineering company determined the recommendation for hoisting the bridge without compromising the century old structure. Mammoet’s engineering and field personnel came up with a solution to securely lift the bridge, measuring 252’ in length and weighing 200,000lbs, to meet those recommendations.

Westpro – A division of Pomerleau superintendent George Lineham said, ”The 12th Street Bridge lift and removal was a well-planned and well-executed procedure that was completed by Mammoet and Dakota Demolition. Thanks to good communication and preparation, the lift was a great success, which was closely observed by media and plenty of locals on the river banks.”