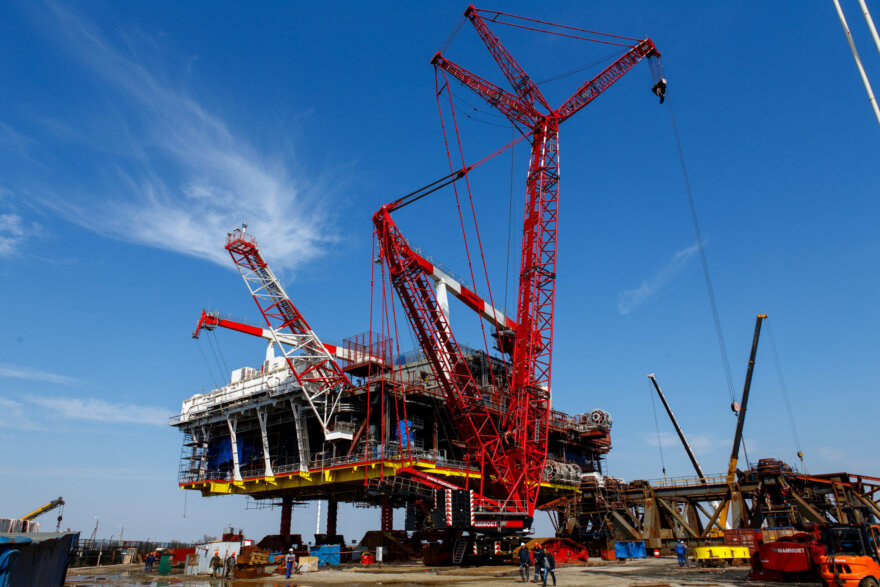 Mammoet Russia safely completed the load-out of the offshore, ice-resistant, stationary platform LSP-2 onto a barge for its further transport to the Filanovsky field in the Caspian Sea, Russia. The platform is intended for Phase 2 of the Vladimir Filanovsky field development project.

The Filanovsky field is the largest oil discovery in Russia in the past 25 years. It is located in the northern part of the Caspian Sea, 220 km. away from Astrakhan. The field has anticipated reserves equal to 129 million tons of oil and 30 billion cubic meters of gas. The production rate of the platform will equal 6 million tons a year.

Previously, in 2014, Mammoet Russia helped Lukoil with the construction and load-out of a central processing platform (CPP) for the Vladimir Filanovsky field weighing nearly 10,000 tons. It was the heaviest load-out of this type in Russia. The project took more than 18 months of preparation, including calculations, design engineering, and coordination. Detailed planning and execution was required as the depth and flow of the Volga river provided an execution window of just four days. However, when the time came, the river levels hit the optimum point earlier than anticipated. By being quick on their feet and by mobilizing the right staff from their global pool, Mammoet nevertheless successfully responded to the new situation and on 12 June 2014 the CCP topside along with a transport frame were successfully installed on barge supports.

As a result of this performance, Mammoet Russia won the contract for weighing, jacking and the load-out of the LSP-2 platform under the Lukoil’s Filanovsky field development project. For weighing and jacking of the 7,400-metric-ton platform, Mammoet used their JS2400 push-up system. This allows heavy and oversized structures to be constructed on the ground and subsequently raised to the correct height ready for the load-out operation. In this case a load-out frame was inserted during jack up to provide sufficient height for installation at sea. Using this system removes the need to work at height, significantly increases safety and reduces the operation time. As a result, the weighing, jack up and load out of the platform took less than 40 days.