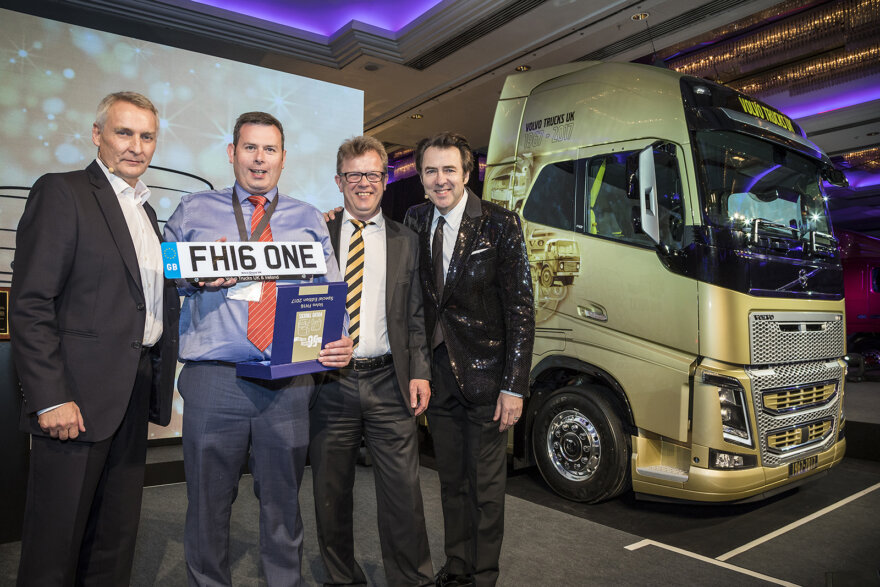 In a ‘once in a lifetime’ moment that will never be forgotten by the 400 plus customers, dealers, and employees of Volvo Trucks that were present, Chris Slowey of Craigavon-based Manfreight placed the winning bid of £220,000 at a charity auction that saw him become the proud owner of a truly unique ‘Limited Edition’ Gold FH16-750.

Hosted by Jonathan Ross as Master of Ceremonies, the occasion was a spectacular ‘Gala Dinner’ held on 4th April at the Hilton Birmingham Metropole Hotel, near the NEC, as part of Volvo’s 50th anniversary celebrations to mark its entry into the UK truck market in 1967.

The highlight of the evening proved to be a special auction, overseen by broadcaster and auctioneer for the night, Jonny Gould. The star prize – an exclusive limited edition ‘Limited Edition’ Gold FH16-750 with a unique no. plate : FH16 ONE – proved to be a tension-packed high-point with Volvo Trucks committing to donate all monies raised over and above the truck’s reserve price of £100,000 to charity.

Chris’s successful bid, in which he pipped a number of notable Volvo customers to the prize, will see both Transaid and Manfreight’s chosen Cystic Fibrosis charity, benefit from donations totalling £120,000. Chris chose to support the Cystic Fibrosis charity in honour of his sister Anita, who passed away six years ago.

Speaking after making the winning bid for this unique truck, Chris Slowey said that he was dedicating the flagship truck to the memory of his late father, also named Chris. Speaking of the event, Chris Slowey stated “I am delighted to have won the best bid at the auction for the Limited Edition truck, and more importantly to be able to support such worthwhile causes, one of which is very close to my heart. Next year we will be celebrating our 45th anniversary in business and for 40 of those years, we have been buying Volvo trucks. The Limited Edition will be the flagship truck of our fleet and it will make a lovely tribute in honour of my father Chris, the founder of Manfreight.”

According to Chris, who is a long-standing customer of Dennison Commercials, he is yet to decide whether to put the truck to work in Manfreight’s 150 plus fleet of mainly Volvo trucks or to keep it in pristine condition as a show truck.

The one-off FH16-750, whose existence has been kept a closely guarded secret, features stunning artwork by top truck artist Matt Paint, depicting key trucks in Volvo’s 50 years in the UK. The back of the cab features portraits of Jim Keyden and Jim McKelvie, the far-sighted and entrepreneurial founders who first brought Volvo trucks to the UK under the guise of their company ‘Ailsa Trucks’.

The evening was filled with great memories of the fantastic highlights in the Volvo story in the UK during the last half-century, including seven historic Volvo trucks on display – six of which were kindly loaned by customers, Alex Anderson, Duncan Coulthard, Chris Hayes, ‘Nobby’ Caistor and John Andrews. The seventh truck, chassis number 1927, was the first F86 to be registered in the UK and now owned by Volvo Trucks.