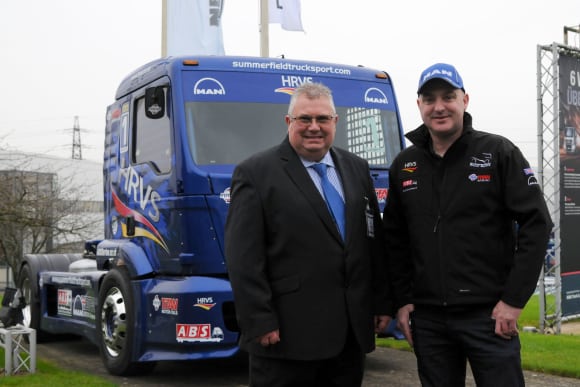 Staff at MAN Truck and Bus were treated to a show-stopping experience when British Truck Racing champion Mat Summerfield rolled up at their HQ.

The three-times British champion, and current title holder, spent the day at the Swindon site, meeting staff and displaying his purpose-built 1150BHP MAN TGX , which he has driven to victory in another successful season at home and abroad.

Keith Sims, operations director for MAN dealers HRVS Group Ltd, which is main sponsor to Summerfield Trucksport, said: “It was a fantastic day and brought Swindon to a halt.

“Mat’s trophies for this season alone covered three tables and it was a huge boost for everyone.

“To win the title three times is unprecedented, and Mat’s truck was the only one to finish all the races during the season a testament to the truck and pit crew.

As well as retaining the British title Summerfield Trucksport took first place in Le Mans, in France, and second and third places at Nurburgring, in Germany.

Keith said the Burton-based team also took the opportunity to plan for next season and developing the relationship with MAN.

Over the winter months Mat and his team will be working on the truck they hope will take them to victory again in Britain and into Europe.

Keith said: “One of the main qualities of the MAN truck is its reliability. Mat will be upgrading his truck with the styling of the new MAN Euro 6 cab.

“He is hoping to upgrade the engine to the new A-Class MAN Race engine and will be modifying it to deliver 1250BHP on the track. He will be looking for further success in Britain and again in Europe.”