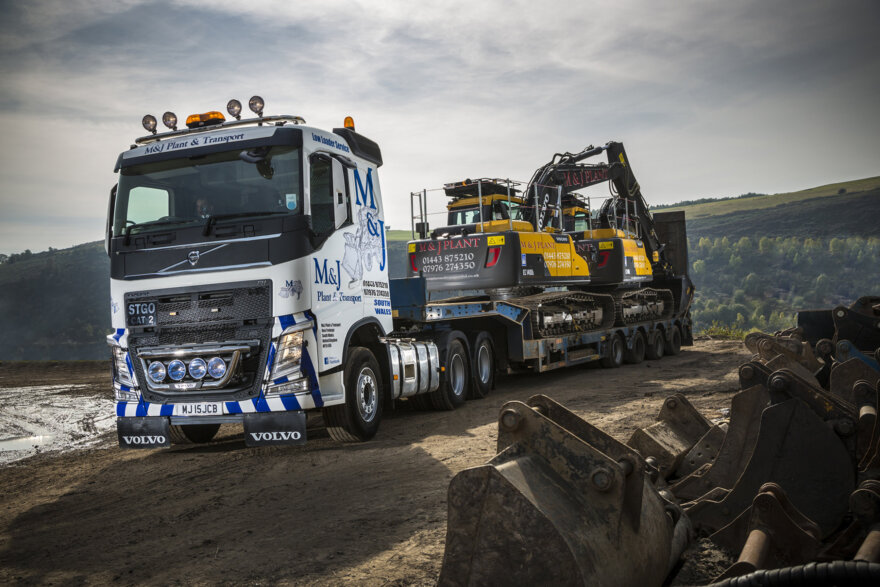 Owner Kevan Hares says: “When it came to the new tractor unit I turned to the Volvo Used Trucks network, but what I wanted simply wasn’t available. As such; I bit the bullet and following great advice and support from Volvo Truck and Bus Wales & West, and particularly salesman Darren Padfield, I decided to buy new.”

Kevan says that buying new was a big commitment but he now has the exact truck he wanted, specified to the needs of his business. “Buying a used truck generally means you end up making do with someone else’s preferences. Through buying new I was able to specify the truck to my needs and this means a lot. I have elected to use the Drive Plus and Living packages to enhance the driving environment and this really takes the strain out of being on the road.”

The new Volvo FH has a GCW of 80 tonnes, which gives Kevan the capability to carry up to 55 tonne loads. “Hitched to our Faymonville 4 axle semi-trailer we are now in a position to transport some pretty heavy plant,” he says.

While M&J Plant and Transport operates some 38 excavators from 1.5 tonne to 30 tonnes as well as backhoe loaders, Kevan envisages that much of the workload for the new Volvo FH will be on the transport side of the business, moving customers’ heavy equipment. “I now have the confidence that if a customer wants us to go from John O’Groats to Land’s End we can do it in a heartbeat and that feels good.”

Kevan’s first Volvo truck was a Volvo FL6 that he bought in 1994. “I have a long history with Volvo,” he says. “I have tried other trucks in the past but I’ve always returned to Volvo because of the reliability, the performance and the fuel efficiency.”

Already, the fuel efficiency of the new Volvo FH has impressed. “We’re really pleased with the mileage,” says Kevan. “The regular driver is now getting between 7 and 9mpg rather than the 4mpg he was getting with the older truck.”

“Furthermore, the comfort of the new Volvo FH is fantastic. You can get out after a long run and you don’t feel fatigued. The I-shift gearbox is a dream to use and with each day that passes I feel more and more at ease about the reliability.”

Kevan adds: “We elected not to take an R&M contract as we have four fitters, a welder and an apprentice in-house who can handle the maintenance and any repairs as well as carrying out our regular compliance checks. That said, the support from Volvo Truck and Bus Wales & West in Pontypridd is very good, so if we do need anything we know assistance is never far away.”

The brand new Volvo FH is powered by a 12.8 litre Volvo D13K engine producing 540bhp and up to 2600Nm of torque, which is transmitted to the road through a 12-speed I-shift automated mechanical gearbox. The truck joins a fleet of five Volvo FM13 8-wheel tippers, three Volvo FL6 road sweepers, a Volvo FM9 with beavertail and loader crane and a 44 tonne Volvo FM Globetrotter tractor unit already at the company.