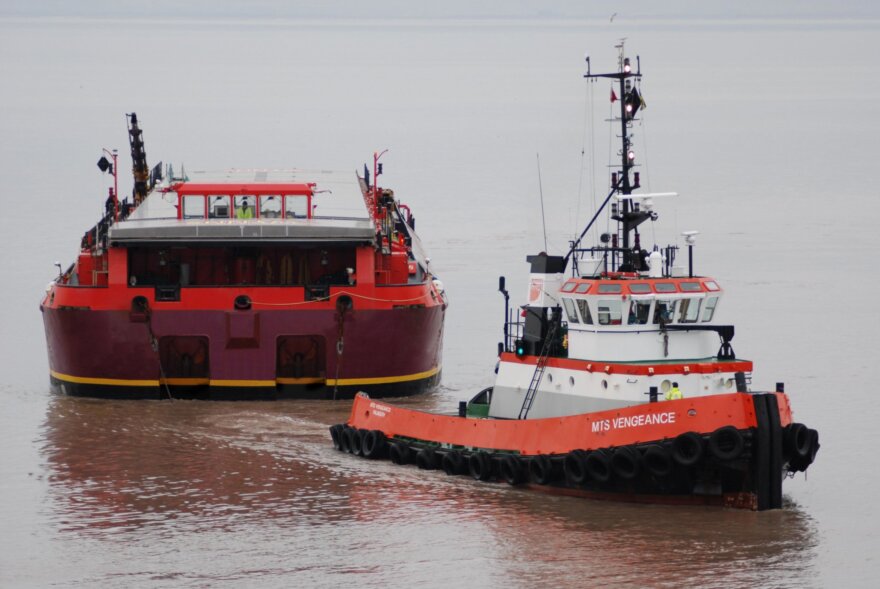 The transmission assets will be installed as part of National Grid and ScottishPower Transmission’s £1 billion Western Link project – a 385km subsea cable, which will bring much-needed renewable energy from Scotland to homes and businesses in England and Wales.

The charter formed part of a longer-term contract, which will see multi-purpose tug MTS Vengeance continue to support Robert Wynn’s unique barge Terra Marique for a number of further charters in UK and European waters. Transformers form an essential part of the electrical infrastructure of the UK. However they are often very large and extremely heavy components, and notoriously difficult to transport. For the Western Link project, a total of 9 transformers were delivered in three separate shipments to the site of the onshore converter station at Hunterson. The largest of these transformers weighed 325 tonnes, with the entire consignment weighing in excess of 2500 tonnes.

With many of the global transformer manufacturing facilities located in mainland Europe, transporting this crucial equipment to project sites in the UK is a significant logistical endeavour, requiring the use of a specialist barge and the expertise of an experienced international tug operator.

Terra Marique is an 80m towed sea-going barge designed to handle abnormal indivisible loads of up to 1,350 tonnes. This capacity is supported by the ability to receive loads by crane, from specialised trailers using conventional Ro-Ro (roll-on/roll-off) or from inland barges using its integral semi-submersible capability. Terra Marique can deliver or receive loads via existing infrastructure, riverbanks or through beach landing. This specification makes the barge ideal for the transportation of large abnormal indivisible loads – such as high voltage transformers.

For the duration of this charter – a three-month assignment involving three separate runs from Rotterdam to Hunterston, via the South Coast of the UK – MTS deployed its versatile multi-purpose twin-screw tug MTS Vengeance to tow the barge from port to port.

In managing all aspects of the towage and sea operation between ports, MTS was able to give Robert Wynn time to plan the complex loading and offloading operation, resulting in a timely, safe and efficient delivery of the transformers to site.

“A huge nationally significant infrastructure project such as Western Link relies heavily on large, pre-manufactured components,” said Jon Parslow, Managing Director, MTS Group Ltd. “The value of an asset such as a transformer to a subsea cabling project of this nature cannot be understated, since it forms an essential part of the onshore transmission infrastructure required to transfer power to and from the grid. That’s why timely, safe transportation is absolutely critical and requires not only the right vessel for the job, but also the expertise and skill of an experienced vessel operator.”

Andy Manners, General Manager, Robert Wynn & Sons, added: “Transporting heavy and abnormal loads such as large electrical infrastructure components is our day-to-day business. However each new charter is unique and the logistical operation of loading and offloading requires meticulous planning. Partnering with MTS has allowed us to concentrate on what we do best in the knowledge that our equipment and our clients’ assets are in safe hands between ports.”

The contract between MTS and Robert Wynn continues into early November, and will see the two firms complete onward transport of significant electrical infrastructure equipment for power generation projects in Northern France, the North East and the South West of the UK.