ITH THE INTRODUCTION OF THE NEW TRUCK GENERATION, MAN TRUCK & BUS IS ALSO LAUNCHING NEW HEAVY-DUTY SEMITRAILER TRACTORS FOR TRAIN WEIGHTS OF UP TO 250 TONNES AND OVER. IT WAS TIME FOR THE FIRST PRACTICAL TEST OF A DEMONSTRATION VEHICLE FROM THE NEW GENERATION.

The convoy’s job was to transport a tube-welding line from Lebach in Saarland to the Saarlouis port to be loaded onto a ship. W. Mayer GmbH & Co. KG from Zweibrücken was commissioned to carry out the job; it deployed five MAN heavy-duty semitrailer tractors for this purpose. Alongside the company’s own TGX 41.680 with V8, the demonstration vehicle with its 640-hp D38 engine had the chance to prove itself as the lead vehicle in the push-pull combination. Together with a “pushing” rear vehicle from the previous generation, which was also equipped with a 640-hp engine, a 20-axle swing axle low loader trailer with a 233-tonne component was also used. At over 7.3 metres tall and 5.3 meters across, the push-pull combination came to a total length of 51.4 metres, and a gross weight of 374 tonnes. 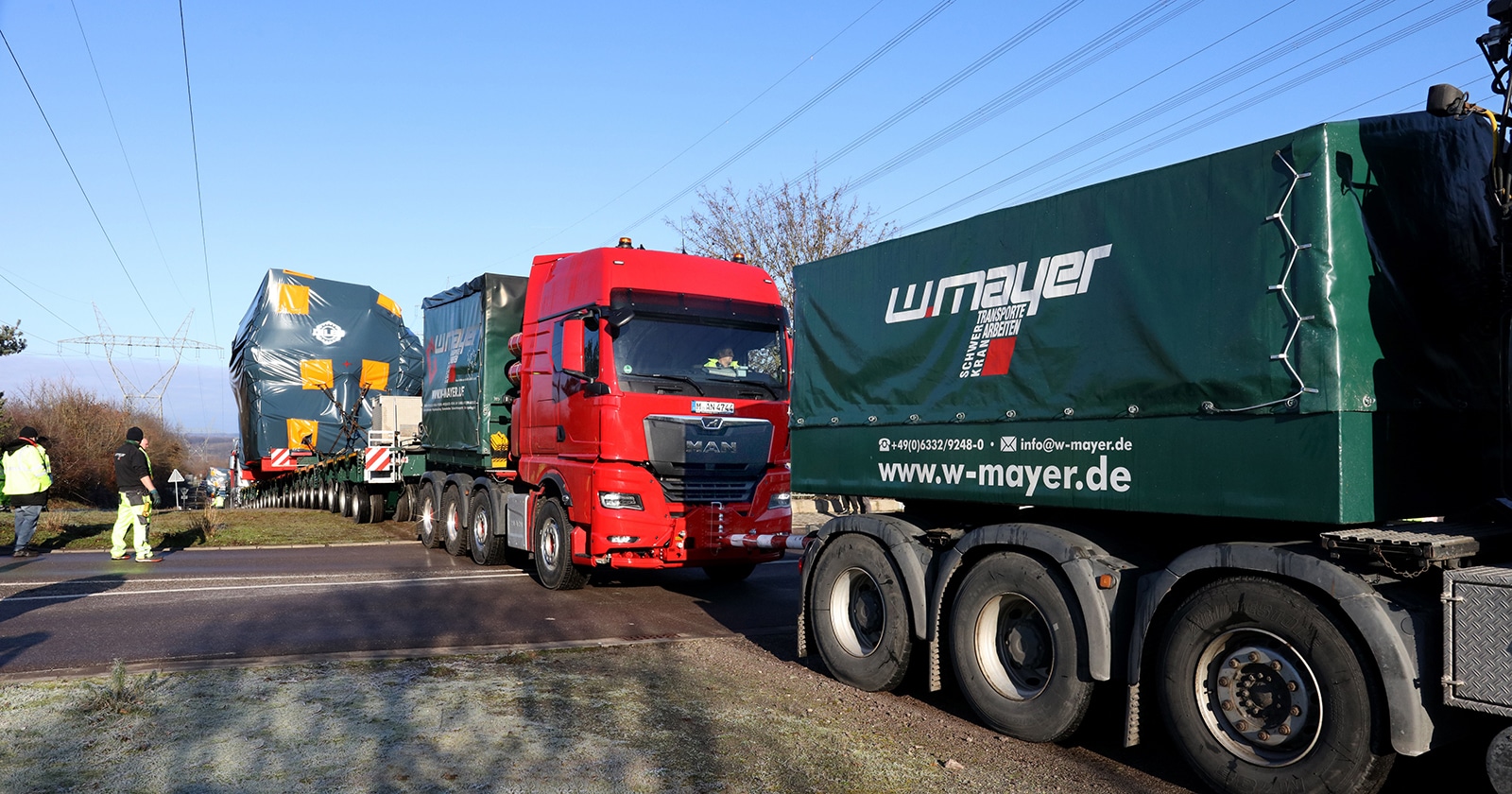 Rainer Beyer, who is responsible for special vehicles at MAN Truck & Bus Deutschland, gives us the details. “Experts are familiar with the demonstration vehicle’s driveline because of the previous TGX heavy-duty semitrailer tractors: 15.2-litre engine with 640 hp and 3,000 Nm torque, a reinforced propshaft with 36,000 Nm shear moment, 16-tonne rear axles and a ZF TCHD (Torque Converter Heavy Duty) with 12-gear MAN TipMatic 12.30 and converter-clutch unit 440. We have a conversion factor of 1 to 1.58, resulting in a breakaway torque of 4,740 Nm. After the hydrodynamic start-up, the converter is locked up when 1,200 rpm is reached, and the process continues with the dry clutch. So far, all of this sounds familiar. What’s new with this vehicle is the whole actuation and the newly configured software and Heavy Duty programming.”

Intarder 3 with up to 630 kW together with the 600-kW engine brake Turbo EVB ensure a powerful continuous braking performance. However, the brake output is limited to 980 kW when combined, in order to protect the driveline. Incidentally, the basic configurations remain unaffected in the new heavy-duty generation. “Very major modifications are not wanted in the heavy-duty area anyway,” says Beyer, speaking from experience. “Frames, chassis, axle spacings – all these will remain as usual. This means that the customers will have the advantage of being able to keep using existing certificates of exemption.”

After a journey of nearly five hours, the MAN delivered its cargo safely to the Saarlouis south quay. At the port, Christian Lahm, technical manager at the heavy-duty haulier based in Zweibrücken, summed up the situation with satisfaction: “The new MAN did well. We were already impressed with the predecessors with V10 and V8; the chassis and driveline technology suit the MAN very well. At some point we will have to replace our vehicles, and when we do, the new one with its D38 engine has already made a good impression.”