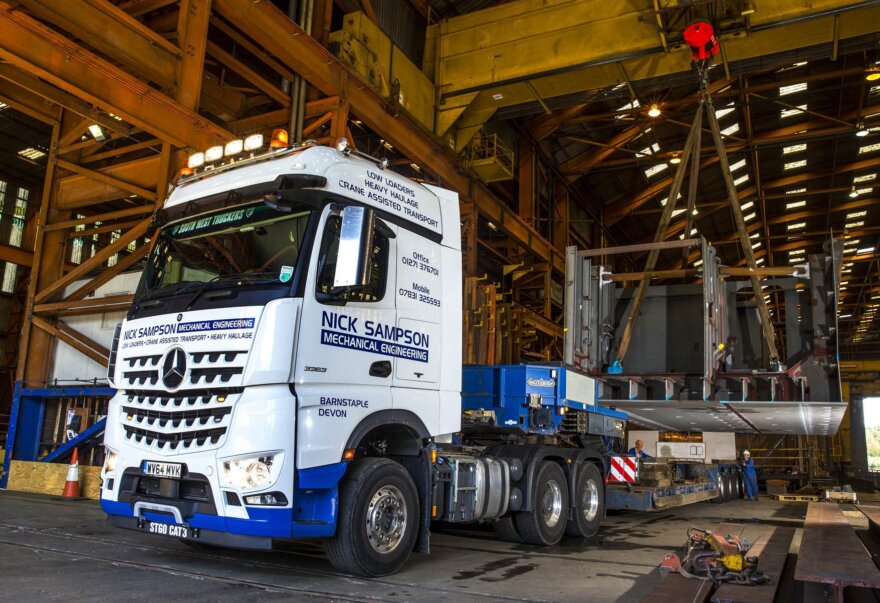 The 155-tonne Arocs 3363S was supplied by South-West Dealer City West Commercials in October 2014, giving the operator plenty of time to form an accurate picture of its capabilities.

“The Arocs is certainly living up to our hopes and expectations, and is proving to be a highly flexible, cost-effective addition to our fleet,” confirmed proprietor Nick Sampson.

Exceptionally robust thanks to its high-strength, reinforced frame, the all-steel sprung double-drive tractor unit has been engaged on a contract which entails transporting fabricated sections and components for the new Royal Navy aircraft carriers HMS Queen Elizabeth and HMS Prince of Wales, from Babcock’s Appledore Facilities in North Devon, to Scotland.

“Our new truck has been making this run about three times a month,” said Mr Sampson. “The loads are invariably big but not always that heavy, and while figures don’t mean a lot we’ve noticed that in terms of mpg performance the Arocs is very good, particularly when running light.”

Customers for the latest Mercedes-Benz Actros and Arocs heavy haulage models can choose from three output versions of the advanced OM 473 15.6-litre in-line six-cylinder engine  – at 460 kW (625 hp), Nick Sampson Engineering’s is the most powerful.

Completing the drive system are the 16-speed Mercedes PowerShift 3 automated transmission and the Turbo Retarder Clutch. The clutch is wear-free, fuel-efficient, and offers exceptionally fine control characteristics when pulling away and during low-speed manoeuvring under heavy loads.

Capable of handling and delivering some 3,000 Nm of torque, significantly more than a traditional torque converter, it also has its own, powerful integrated primary retarder. This negates the requirement for the separate retarder that would otherwise be needed to assist the high performance engine brake in bringing a fully loaded rig safely to a halt.

Nick Sampson had already ordered his new Arocs BigSpace after hearing and reading positive reports about the Turbo Retarder Clutch, when he joined a party of heavy haulage operators who visited Germany last year as guests of Mercedes-Benz, to run the rule over the new range.

“The truck is not on heavy duties every day and given the diverse nature of our work the versatile turbo clutch suits us very well,” continued Mr Sampson. “It certainly contributes to economy by offering the fuel efficiency of a conventional clutch for normal operations, but also delivers the performance of a torque converter for when we need to pull a piece of construction equipment at 70 or 80 tonnes up a steep bank.

“Our driver finds the Arocs easy to manoeuvre at low speeds and the retarder reassuring when he does have a heavy load on. The service from City West Commercials has also been very good, though I’m pleased to say that we haven’t needed them much because the truck is working so well.”

Nick Sampson Mechanical Engineering was established in 1987 and, in addition to haulage, provides a range of crane fit and hire, truck and plant repair, welding, fabrication and precision engineering services to the construction, road transport and civil engineering industries.