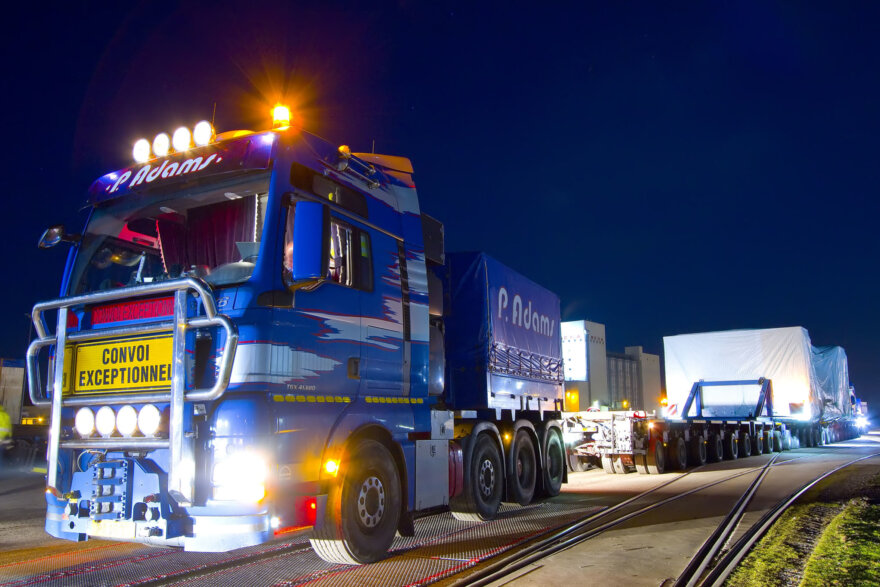 A baptism of fire awaited P. Adams haulage earlier this year: the task was to move press components weighing a total of 700 tons from the Danube port of Straubing to the works of a Korean automotive supplier in Niederaichbach. With the client more than four weeks behind schedule with the cargo, the haulage company had to pull out all the stops to meet an extremely demanding delivery target involving twelve journeys in just four days.

For Robert Müller, Project and Transport Manager at P. Adams, that is business as usual: “We are used to handling exceptional jobs under pressure of time.” As project manager, Müller is responsible – among other things – for the route planning. In this case the 60km route was a major challenge. Out of a total of twelve journeys, three required special routing.

The heaviest item, the 240-ton machine head, was moved off the barge in the port in Straubing and placed on 24 Goldhofer THP/ST axle lines. With the cargo, the complete push-pull rig weighed in at 370 tons and was almost 60 meters long. Special measures were also required for the 160-ton press ram and the 150-ton slide (16 axle lines each) – like driving the wrong way onto the autobahn at Straubing. That was because the rigs were too heavy to pass over the Straubing autobahn bridge.

The solution was to drive each of the three exceptionally heavy loads up the autobahn exit slip road and on to the wrong carriageway on the other side of the bridge. With the support of a police escort, the three heavy-duty combinations were driven one by one on the wrong side of the A 92 autobahn to a point where the central barrier could be opened to permit them to move onto the correct carriageway.

Müller adds: “The Straubing roundabout was also mastered by using the wrong side of the road. We drove left onto the roundabout, took the first exit and stopped. Then we switched the tractor from front to back, and the journey continued in the other direction with nothing tighter than a 90 degree turn. As the remaining nine loads could be transported using less challenging heavy-duty combinations, the other journeys were completed on the autobahn to Niederaichbach without the need for any unusual measures.

The P. Adams company today operates an impressive Goldhofer fleet comprising 107 axle lines and various accessories including a turntable bolster, low-profile drop deck and vessel bridge – the result of a long and successful business relationship between the two companies. “We are not afraid to tackle the most daunting challenges proposed by our customers,” says the project and transport manager. “Over the years we have maintained a dialogue with Goldhofer’s experts in that context. In many cases we communicate our customer’s requirements to Goldhofer and to that extent have played a role in the mutual development of heavy-duty modules.”

Apart from Goldhofer’s role as a source of inspiration, the people at P. Adams also appreciate their determination to consistently find and develop new solutions. Müller: “The demands made in the field of heavy haulage are growing all the time. With Goldhofer, we have a partner capable of offering the solutions for tomorrow in terms of top-quality materials and full service. We have the know-how to take those solutions to handle our customers’ transportation needs.” 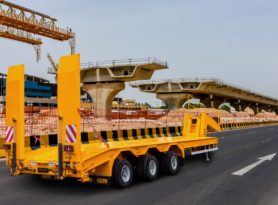 It was not for the first time that the German trailer manufacturer DOLL secured the contract for the production of vehicles destined for the ...