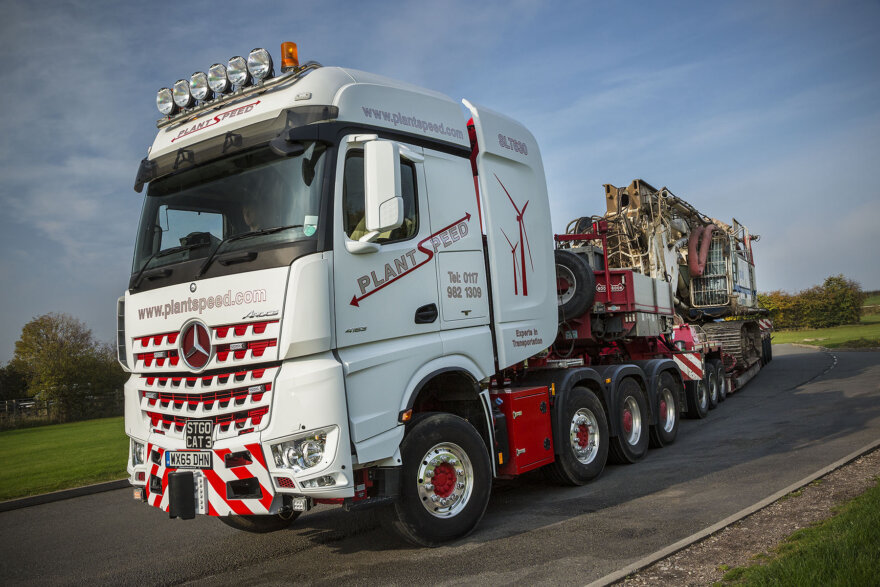 So impressed was Bristol-based Plant Speed with the 250-tonne Mercedes-Benz tractor unit it purchased from local Dealer City West Commercials nearly three years ago, that it has just commissioned a second.

The new arrival is an 8×4 Arocs 4163S model from the Euro 6 SLT range launched last year. Plant Speed’s previous vehicle, which was both its first 250-tonner and its first Mercedes-Benz, is an Actros 4165S.

The SLT – the ‘S’ stands for Schwer (heavy), ‘L’ for Last (load) and ‘T’ for Transport – is also available as an Actros. However, its higher axle load capacity ratings means the all-steel sprung Arocs is best suited to most domestic operations.

Plant Speed specialises in the movement of heavy plant, machinery and ‘out-of-gauge’ equipment throughout the UK and Europe, and employs a highly trained and experienced team of drivers and support staff capable of handling the most awkward and delicate loads.

Plant Speed’s Actros was one of the UK’s first vehicles to be fitted with the ground-breaking Turbo Retarder Clutch, which works in conjunction with the 16-speed Mercedes PowerShift automated transmission. This system replaced the previous manual gearbox and torque converter clutch, and was key to the operator’s decision to make its second, major investment in the three-pointed star.

“The Turbo Clutch is a fantastic piece of kit,” enthused Managing Director Paul Lomas. “It’s very sensitive and offers fine control characteristics, so for low-speed manoeuvres, or when pulling away on a steep gradient, it’s absolutely brilliant. There’s nothing else like it on the market, which means it really sets Mercedes-Benz apart from the competition.”

Wear-free and fuel-efficient, the Turbo Clutch is capable of handling and delivering some 3,000Nm of torque, significantly more than a traditional torque converter. It also incorporates its own, powerful integrated retarder; without this, a separate retarder would be necessary to assist the high-performance engine brake in bringing a fully-loaded 250-tonne rig safely to a halt.

Mercedes-Benz SLT chassis are exceptionally robust, their strong, reinforced frames having no joints or welds, and provide the ideal mount for heavy duty front and rear coupling points. They are also instantly recognisable, due not only to their fourth axles (where fitted), but also to the large side panels at the rear of the cab. These direct airflow for enhanced cooling of the clutch via a radiator mounted in the tower behind the cab. This tower also houses various ancillaries such as the air and fuel tanks, and batteries.

Plant Speed operates nationwide and in its first few weeks on the road the Arocs has been used to transport everything from wind turbines and heavy plant, to bridge sections on bolsters.

Mr Lomas continued: “We’ve had one or two teething issues but they have been sorted quickly and efficiently by City West Commercials, who provide a very good service.

“These are still early days, of course, but with its high ground clearance the Arocs certainly looks the part. Our driver is very pleased with it too, not least because the spacious, comfortable cab has been upgraded and the layout improved. Mercedes-Benz has obviously put a lot of thought into this latest workspace.”

In addition to its two, 250-tonne units, Plant Speed operates another 16 tractors with gross combination weights of between 44 and 150 tonnes.