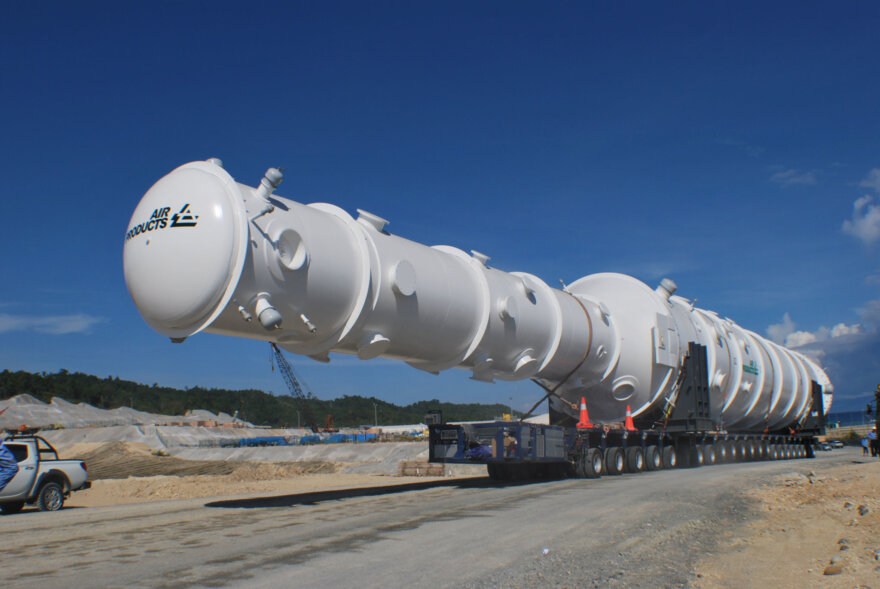 Construction of a fertilizer production plant, a natural gas processing plant and extending a chemical production facility: Two Goldhofer PST/SL self-propelled combinations were employed by PT Guna Teguh Abadi (GTA) Construction for each of these three mega projects in Indonesia.

The natural gas plant, which covers about one square kilometer, is located some 25 kilometers from Luwuk, the provincial capital of Central Sulawesi, on the island of Sulawesi, which lies between Borneo and New Guinea. It is being built by a consortium led by a state power utility company and comprising of several international corporate partners.

GTA Construction’s PST/SL 22 self-propelled module, supplied by Goldhofer, was used to transport the main Cryogenic Heat Exchanger, with a weight of 242 tons, from the unloading point to the plant. With a length of 48 m, an overall traveling height of more than 6.5 m and an overall width of more than 5 m, the operation was challenging. However, the maneuverability of Goldhofer’s 22-axle self-propelled vehicle ensured that no problems were encountered.

In this case, GTA’s two Goldhofer heavy-duty transporters were used for different operations, starting with the transportation of a 630 ton Carbon Dioxide Absorber and then a HPLP Flash Chromatography Column that weighed 515 tons, from the port to the construction site in Palembang.

With a length of more than 55 m and an overall width in excess of 6 m, the Absorber operation was a special challenge for the GTA team. Because of the width of both the Absorber as the first load and then the Column as the second, a parallel combination with 2×26 axle lines was employed for both loads. For the subsequent transportation of an Ammonia Converter, a single self-propelled combination with 26 axle lines was used to handle a total laden weight of 787 tons.

Lastly, the transportation of a Propylene Fractionator from place of fabrication to delivery at a Chemical Production Facility in Banten Province, West Java was conducted in two sections. This was due to the challenges presented to GTA of operating in a ‘live’ environment, where the Facilities’ operational capacity was being increased, whilst production continued unaffected at the site.

Over the last two decades, Goldhofer of Memmingen in Bavaria has placed a growing focus on the development of heavy and ultra-heavy load vehicles and has increased the number of its Asian customers in the process, such as PT Guna Teguh Abadi Construction. Today, Goldhofer is one of the big names for heavy load vehicles in Asia.