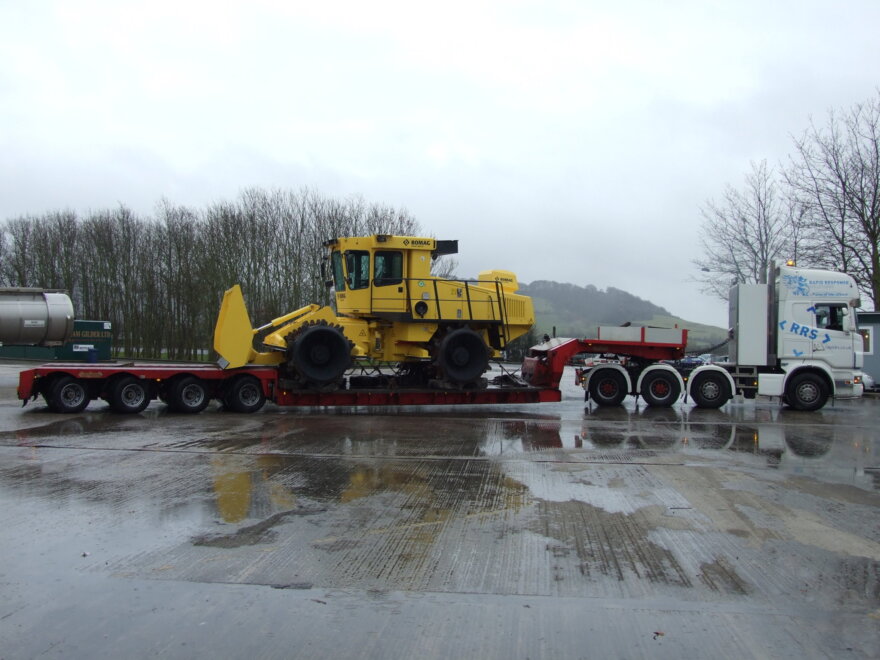 The Portsmouth, UK-headquartered lifting and transport specialist, which is regularly called upon by heavy equipment manufacturer Bomag, was summoned to load a brand new refuse compactor, model BC 772 RB, transport it and deliver the machine to site.

The 3.8m-wide load, contributing to a gross transport weight of 96t, was followed by an escort vehicle throughout the six-hour journey, before RRS oversaw unload and handover of the purpose-built machine for use on large and small landfill sites.

Dave Pushman, head of transport at RRS, said: “We utilised our largest tractor unit and a four-axle Nooteboom trailer, which took care of the weight, but we also had to keep in mind that the widest point on either side of the load were the solid metal wheels with eight-inch protrusions, designed to efficiently compact waste onsite but inherently hazardous when in transport.”

RRS had to complete route notification, whilst consulting with police authorities and highways agencies. The job was executed to plan with the entire process completed in daylight. Pushman explained that it is always preferential to transport loads in natural light but there are sometimes stipulations that require travel to be limited to set hours when traffic is at its lightest—even overnight.

The tractor, manufactured by Scania, and empty trailer had a combined weight of 40t but the refuse compactor was first driven onto the low-loader whilst it was flat on the ground. Two hydraulic rams then picked the trailer off the ground for attachment to the truck. Its four axles supported the weight of the trailer, which featured reinforced steel so the tractor wasn’t damaged by the weight.

RRS has a fleet of 25 tractor units, ranging in size, which can transport gross weights of up to 150t. It also offers a selection of low loaders, extendable trailers, wafer decks and semi low loaders. It is equally adept at transporting abnormal loads with self-propelled modular transporters (SPMTs).

Pushman concluded: “Due to the size and diversity of our transport fleet, the Bomag BC 772 RB job was relatively routine. However, we are among very few companies who could fulfill the job specifications. Bomag regularly transports expensive, heavy refuse and other equipment using our fleet and expertise in this specialist field.”