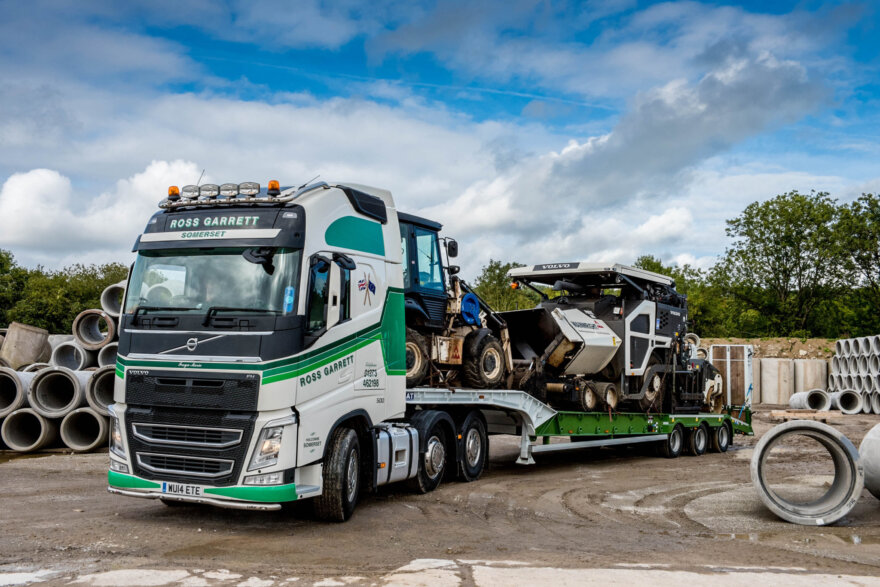 Somerset-based heavy haul specialist Ross Garrett Transport has expanded its fleet with a new tri-axle sloped deck step frame trailer from Andover Trailers, with the company director affirming that “we wouldn’t really want to buy new trailers from anyone else”.

The new trailer, which will primarily move heavy plant weighing up to 36 tonnes around the South-West, joins a fleet of four low-loaders and three flatbeds at the company, one of which is an Andover Trailers-built unit purchased in 1995 – which is still going strong 20 years later.

Luke Garrett, Director, says: “We still run the 1995 trailer every day – it’s testament to the high build-quality of Andover Trailers’ work, and one of my personal favourites to hitch up to. We were so impressed by that trailer’s robust design and durability that we invested in additional Andover Trailers in 2005 and 2009.

“We value our Andover Trailers for their strength, low weight and ease of operation – even on some of the rough roads we have to traverse when we’re loading and unloading heavy plant at quarries and other off-road sites. Plus, the company’s aftersales support is second to none – they’re always on call.”

The trailer’s bed was designed to accommodate six extra pairs of lashing points, enabling multiple configurations of plant to be secured safely. Also incorporated are toolboxes and a chain tray built into the bed for easy and safe storage.

“I asked for a longer neck on this trailer,” adds Garrett. “It’s been shaped so it doesn’t stick out so far when you’re turning into a corner. Being able to request specific changes is one of the things I love most about buying from Andover Trailers.”

The gentle slope of the trailer’s bed allows loading of machines that might struggle with a normal step frame trailer, such as road rollers and access platforms. The company expects the trailer to cover more than 80,000 miles annually, working up to seven days a week.

When he’s not transporting heavy plant around the UK, Luke Garrett regularly takes to the circuit as part of the Ross Garrett Transport truck racing team in an ERF 4×2 – complete with Andover Trailers sponsorship atop its green and white livery.