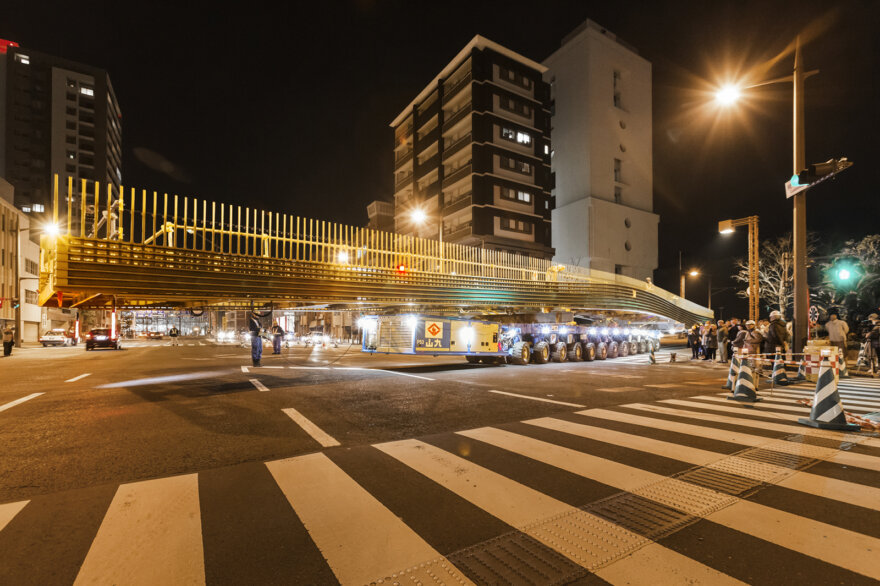 The Japanese island of Dejima was a fan-shaped, artificial island in the bay of Nagasaki. During the Edo period (1603 to 1868), it was the only place where direct trade and exchange took place between Japan and Europe. After Japan opened up in the second half of the 19th century, Dejima gradually became part of Nagasaki city centre as a result of ongoing land reclamation and was hardly recognisable in the 20th century. In the meantime, most buildings have been reconstructed using old plans and models. A canal borders the island and a bridge is used to enter the historic Dejima area. Sankyu, a long-standing customer of the TII Group (over 250 SPMT axle lines in use) and experienced in the transportation of sensitive loads, was commissioned to transport the prefabricated bridge – weighing around 50 tonnes and with a length of 40 metres – through the densely-built urban area.

“Sankyu has been relying on self-propelled transport solutions from the TII Group for a long time,” says Ralf Grützmacher, Area Manager Sales at TII Sales and responsible for the Asian markets. “Manoeuvring the 40-metre long Dejima bridge through the old town of Nagasaki requires experience and precise vehicle control. Here, our vehicles along with the Sankyu specialists have done an excellent job.”