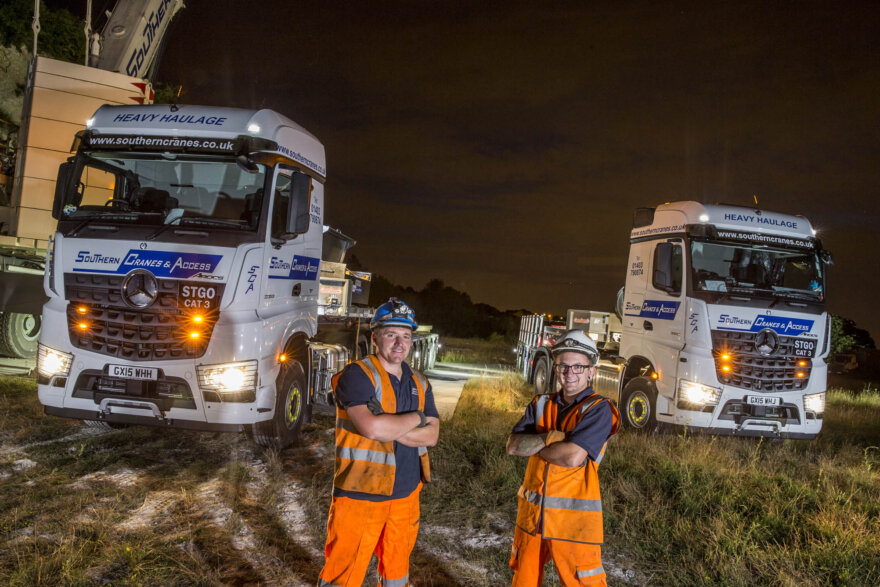 When it comes to investing in new equipment, Southern Cranes & Access doesn’t do things by halves. Latest additions to the company’s truck fleet are a pair of 150-tonne Mercedes-Benz Arocs tractor units which work in tandem with a new Liebherr self-propelled crane worth £2 million.

The trucks pull five-axled Nooteboom low-loader trailers which are also new – taken together, the two truck and trailer combinations represent an additional ‘spend’ of more than £½ million. Each rig transports loads weighing around 80 tonnes. Most of this is accounted for by the steel ballast that serves as counterweights to stabilise the 350-tonne crane during operation, although the trucks also carry winches, hook blocks and other equipment.

Key to the operator’s decision to purchase its first Mercedes-Benz trucks for operation with the six-axled crane was the availability of the new, wear-free and fuel-efficient Turbo Retarder Clutch, which works in conjunction with the 16-speed Mercedes PowerShift 3 automated transmission.

This is capable of handling and delivering some 3,000Nm of torque, significantly more than a traditional torque converter. It also offers fine control characteristics and has its own, powerful integrated primary retarder, negating the need for the separate retarder that would otherwise be required to assist the high performance engine brake in bringing a fully loaded rig of up to 150 tonnes gcw safely to a halt.

Southern Cranes & Access Director Clive Sadler recalled: “We were looking for a truck with a bit more power and liked what we’d heard and read about the new turbo clutch. Rossetts offered us a demonstration unit for a week so we gave it a go and the driver came back singing its praises.” Mr Sadler continued: “The fuel efficiency was at least equal to, if not better than, the less powerful trucks we’d been using, and he really liked the all-round quality and feel of the Arocs. “The automatic transmission and turbo clutch certainly lived up to their billing too – some of the locations we have to access are very tight, which is why we specify our trailers and other equipment with high steering angles, but even fully loaded the truck was very easy to manoeuvre at low speeds.”

Southern Cranes & Access purchased its two new tractor units with funding support from Mercedes-Benz Financial Services. “We’ve only had them a couple of weeks but I’m very impressed and the drivers love them,” Mr Sadler said. “The Arocs certainly looks the part and with its raised ride height and robust build quality is clearly capable of working reliably in rough conditions.” The new tractors and their trailers will be inspected and serviced under Mercedes-Benz Repair and Maintenance Contracts by the workshop team at Rossetts Commercials’ Worthing headquarters. Mr Sadler added: “We’ve dealt with Rossetts for years because a number of our cranes have Mercedes-Benz engines; the Dealer provides a very professional service.”

Southern Cranes & Access relies on a large and versatile fleet of vehicles and other equipment to provide customers across the South-East and beyond with lifting and access solutions for a wide variety of situations. The company also offers access machines and telescopic rough terrain fork-lifts for hire, and runs its own training and assessment centre, which delivers industry-standard courses that can be tailored to meet the specific requirements of customers.

The family-run business was founded by Mr Sadler’s father Mick, who has been involved in the crane industry since 1970. He was a director of Gamble & Sadler prior to 1997, when he launched Southern Crane Services, which later evolved into Southern Cranes & Access.

The Turbo Retarder Clutch provides wear-free starting and braking under extreme loads, and makes it possible to move away with maximum control and minimum fuel consumption. The integral, high-performance primary retarder offers braking power of up to 750 kW (1006 hp) and also functions in reverse gear, while other benefits include a weight saving of around 80 kg compared to a conventional torque converter clutch, and reduced noise emissions.