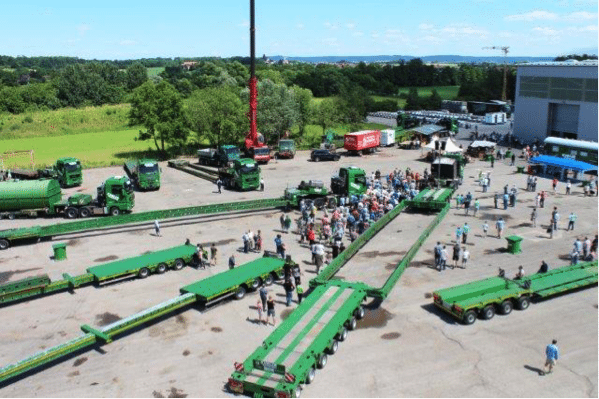 The 85th anniversary of Spedition Kübler, 5th anniversary of moving to the new company headquarters in Michelfeld-Erlin, sixtieth birthday of the managing owner Heinz Roessler and 100th axle line of the SCHEUERLE Combi series in the company´s fleet of vehicles – Spedition Kübler, today an internationally important logistics service provider, had every reason to celebrate. And indeed it did through, among other things, the organisation of a very spectacular event. Spectacular is also the best description for the heavy loads transported by Kübler time and time again on Combi vehicles from SCHEUERLE which was impressively demonstrated in the form of multimedia presentations. 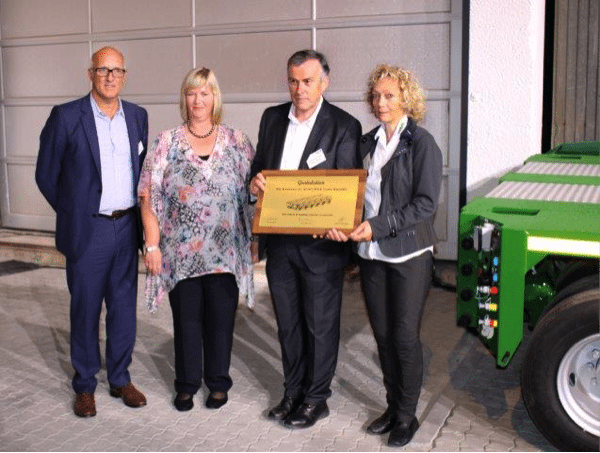 Managing Director and owner, Heinz Roessler and family, put together an impressive anniversary celebration for the 400 invited guests on the occasion of “150 Years of Kübler Spedition”. The company´s 85th anniversary along with the 60th birthday of Heinz Roessler were celebrated at the new facility in Michelfeld-Erlin near Schwäbisch Hall, which has been the new home of the traditional company for the past 5 years. After the welcome speech and presentation of the extensive range of vehicles in the distinctive Kübler green corporate colour – including a “dance performance” carried out by the self-propelled SCHEUERLE PowerBoosters – guests were treated to the finest in culinary delights in the large assembly hall, accompanied by impressive multimedia shows, musical interludes as well as personal greetings and words of thanks.

Mayor Wolfgang Binnig praised the exemplary entrepreneurial commitment of Heinz Roessler who was then privileged to sign his name as an Honorary Citizen in the Golden Book of the Michelfeld municipality on the specially prepared “InterCombi stage”. At the end of the official part of the celebrations, Susanne Rettenmaier, Managing Partner of the TII Group, and Bernd Schwengsbier, Chairman of the TII Sales Executive Board, handed over the 100th SCHEUERLE Combi series axle line ordered by the company. Accompanied by the applause of the guests, owners Heinz and Hanne Roessler unveiled the 3-axis InterCombi bogie unit that had been recently delivered. Before this, Susanne Rettenmaier had thanked the couple for the 35 years of excellent cooperation and partnership as well as the good personal relationship between the Rößler and Rettenmaier family businesses. Susanne Rettenmaier had brought along a cheque for 1,000 euros; together with Heinz Roessler, this was then handed over to Gerhard Stutz, president of the non-profit association “MUT”, an organisation which the Roessler family has been supporting for many years. In addition, the TII Group thanked all Kübler employees with individually printed beer tankards. 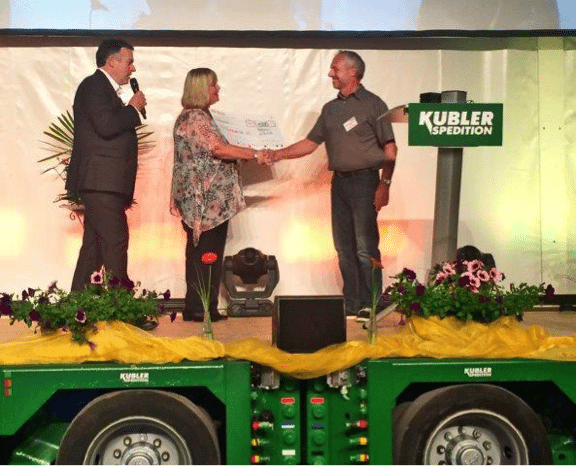 Spedition Kübler acquired its first SCHEUERLE vehicles as long ago as 1985. Since then, the inventory has steadily been increasing. EuroCombi, InterCombi, FlatCombi, InterCombi PowerBooster – the list of SCHEUERLE vehicles in the company’s fleet is long and dominant. “After 35 years, SCHEUERLE and Spedition Kübler are connected by far more than just a business relationship, the cooperation is characterised by a large degree of mutual trust. This counts for a lot because in our industry one must be able to rely on the word and support of the business partner at all times”, according to Heinz Roessler. And Bernd Schwengsbier emphasised in his speech: “Spedition Kübler is a prime example of a successful long-term partnership between users and manufacturers. The feedback that Kübler provides us with based on the daily transport operations with our vehicles is also very valuable regarding the further development of our vehicles.”

Even after the official part of the celebrations ended, there was a lot on offer: Micky Layher and his team from the Technical Museum in Sinsheim invited Heinz Roessler – suitably dressed in fire-proof overalls – for a night-time spin in the spectacular flame-emitting, 700 hp vintage racing car “Brutus”. The party subsequently went on until the early hours of the morning in the bars on the vehicles – a novel and original idea. 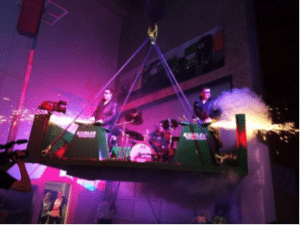