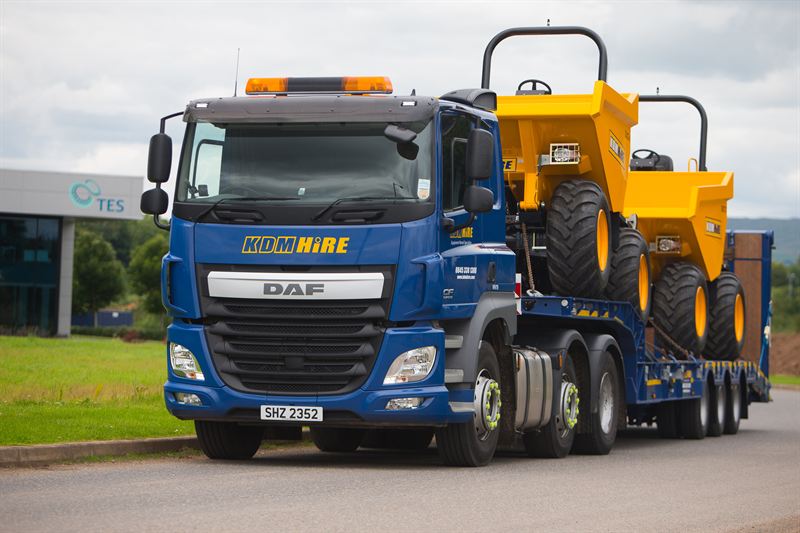 Andover Trailers has launched a new generation of tri-axle Step Frame Machinery Carrier, designed to carry a wide range of machines whilst maintaining a flat deck. Its launch marks one of the most significant new products from the British trailer manufacturer for a decade.

The launch of the SCMFs is a direct response by Andover Trailers to the changing requirements that operators across many sectors are experiencing – namely the ability to use one vehicle to safely move an ever increasing range of machinery. The SFMC gives Andover customers access to a high-specification trailer as standard, one that can be further customised with a range of popular options.

The new model, which has been in development for 12 months, is built to a standard length of 11.9 metres (king pin to rear), is available with a choice of 17.5 or 19.5 inch wheels and tyres – with either BPW or SAF axles – and features a Knorr-Bremse braking system with a Trailer Information Module fitted as standard. The SFMC has a gross trailer weight of 45 tonnes, which can be increased to 48 tonnes if specified with optional slide-out extensions. This gives the trailer a competitive payload of up to 35 or 38 tonnes respectively.

Key to the trailer specification is the combination of a full-length flat bed and full-width power-lifting neck ramp. This makes it flexible enough to carry both tracked and wheeled plant, access equipment with low ground clearance, as well as static payloads such as cabins or containers.

This variety of potential loads means that versatile securing capability is essential. The SFMC therefore features 16 RUD swivel side lashings, rated at 10 tonnes; six screw-in RUD lashing rings on the bed, rated at either 14 or 16 tonnes; along with two chain trays. The neck of the trailer features a further six 13 tonne loops set into the floor and two on the neck riser, plus three toolboxes.

The SFMC trailer has the capability to house a working at height safety system as standard – this can be added at any time during the trailer’s life. All non-structural additions, for example extra lights, winch, choice of headboard and type of ramp can then be added according to customer request. Axles can also be upgraded to lifting or steering variants to meet customer needs.

“Our customers were demanding a more versatile load carrier that could move a wider variety of equipment – all without compromising safety during loading or on the road,” says Bob Gowans, Andover Trailers Commercial Manager. “This trailer is a major step forward in that regard. The innovative approach we’ve taken has allowed us to retain the strength of the four-member design which has kept Andover customers coming back for more than 30 years.”

Two of the new SFMCs have already been delivered: one to County Tyrone-based KDM Hire, one of the UK and Ireland’s largest equipment rental companies; and the second to Wiltshire based paving company, Thornbury Surfacing. Gowans confirms a further four frames are already on order, and customer response is proving to be very positive.

The SFMC is built exclusively at Andover Trailers’ production facility in Andover, Hampshire.