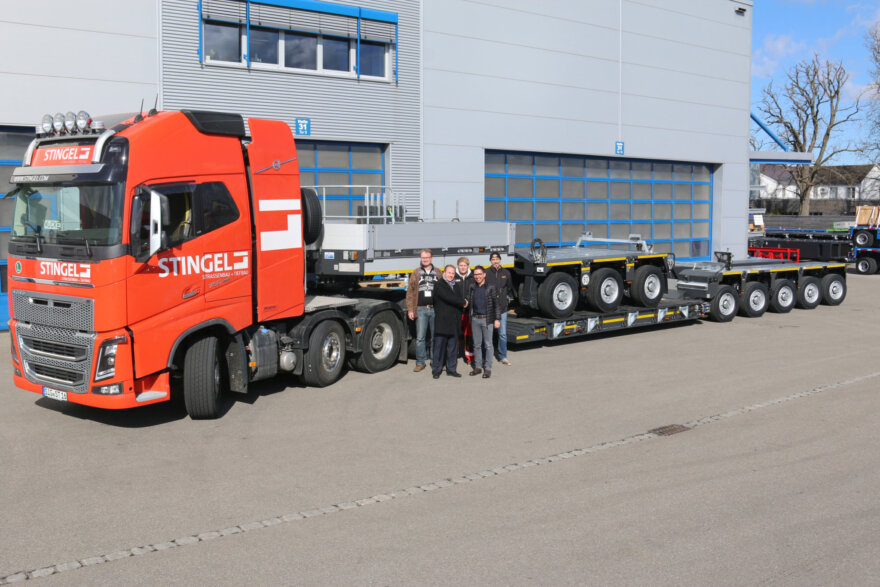 Goldhofer Aktiengesellschaft has delivered a second XLE low loader to the Stingel Group, which is headquartered in the Swabian town of Schwenningen. With its business units for Heavy Haul and Construction Material Recycling, the company is active throughout Germany.

In keeping with the saying “Two’s better than one”, Friedrich Stingel GmbH decided to order a second XLE low loader from Goldhofer with exactly the same configuration as the XLE that was added to the Stingel fleet in 2011. “Having two identical combinations with the same axle spacing gives us much greater operative flexibility,” says Managing Director Christoph Stingel, who – together with his brother Michael and his father Wolfgang – runs the family business, which was founded at the foot of the Heuberg in the Swabian Alps back in 1933. “And in future we only have to make one application for a transport permit, as it will apply to both combinations,” he adds.

Stingel’s new XLE 8, which is extendible by three meters, has a 3-axle platform bogie at the front and a 5-axle bogie at the back with a maximum axle load of 12 t each (technically permissible axle load: 14 t) and is paired with a 4-axle Volvo FH 16 750. Total weight is 131 t for a payload of 85 t. With the extendible drop deck, the combination has a maximum length of 29 meters.

The attractions of Goldhofer’s XLE series include the use of proven components – like the pendular axles with a vertical axle stroke of +/-300 mm, a choice of vehicle widths and a compact gooseneck with dual-circuit steering – as well as compact dimensions, very low deadweight, high axle load capacity and a wide range of extension positions. “One big reason for choosing Goldhofer was their high standard of quality and the long service life of their vehicles,” says Christoph Stingel and he continues: “Of course, there are also advantages to be had from collaborating with a company from the region; the short distances save time and money for servicing and repairs.”

The new XLE is to be used to transport the mobile crushers and screening plants operated by Stingel’s subsidiary SBR Stingel Baustoffrecycling GmbH. “We currently have seventeen such plants. They are operated all over Germany, mainly to recycle materials that are suitable for re-use in the building and road construction industries,” says Christoph Stingel, who sees potential for further growth in this market segment in the years ahead.