With the National Grid being awarded the £100m contract to excavate a 5km tunnel under the River Humber to carry a replacement gas pipeline, Fracht UK Projects appointed trusted Partners Collett & Sons to collaboratively work with & deliver the disassembled tunnel boring machine from Immingham docks to Goxhill. The tunnel boring machine, named Mary, had been manufactured in Baden-Wurttemberg in Germany, with Fracht AG designing a transport solution from Germany alongside vessel in Rotterdam for onward shipment to Immingham.

18 months ahead of TBM Mary’s arrival at the Port of Immingham, Fracht UK and Collett & Sons worked in collaboration to devise a cohesive plan for delivery. Working closely with all key project owners and stakeholders and tailoring the delivery schedule in line with all shareholders’ requirements.

The machine consisted of four components:

On the arrival of the vessel at the DFDS Immingham Terminal each of the four components were surveyed and Inspected by Fracht UK before being loaded to Collett’s awaiting trailers for the 27 mile journey to the Humber Gas Pipeline Project National Grid Site in Goxhill, North Lincolnshire. 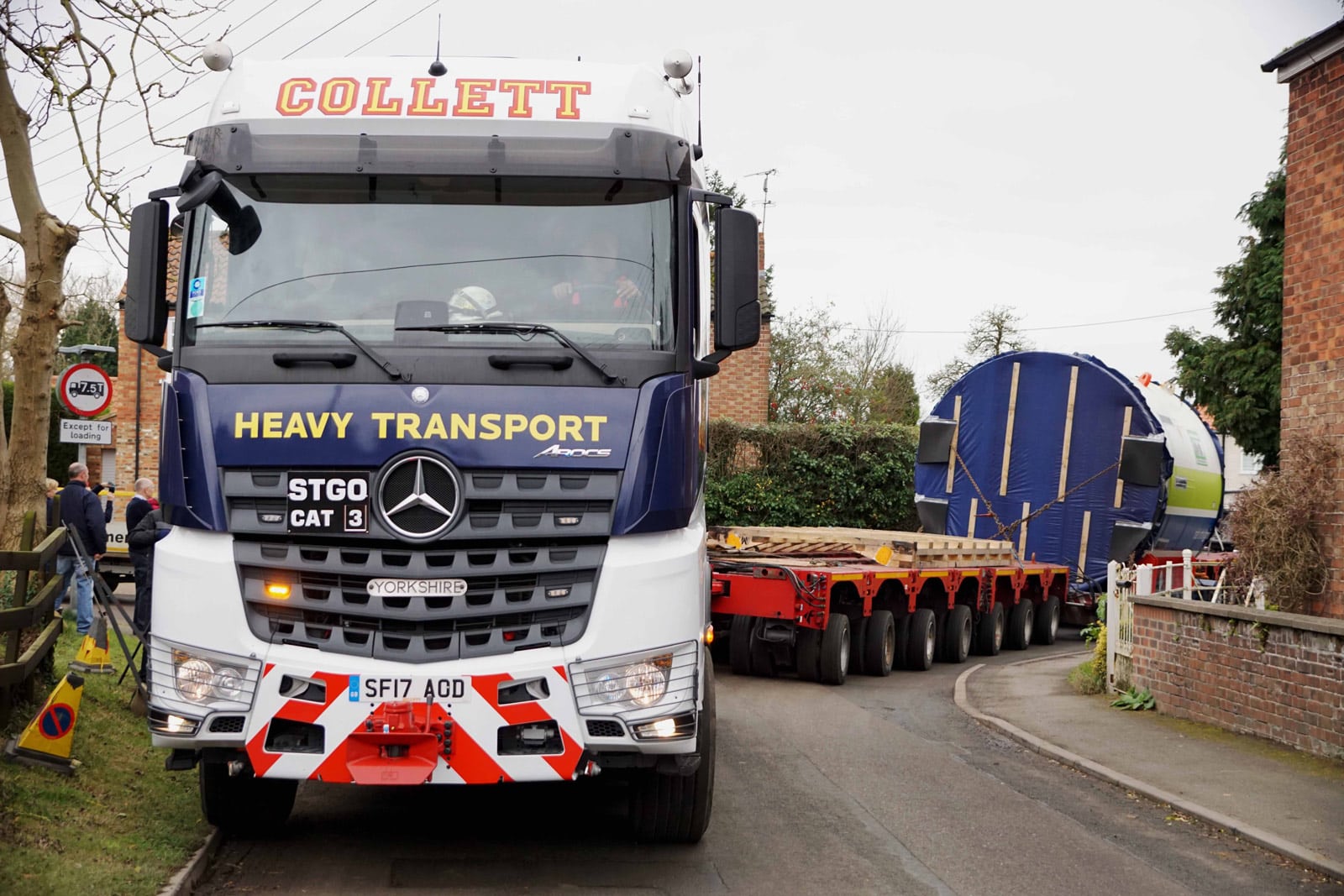 Although this would only be a 27 mile journey the route posed several obstacles which required meticulous planning ahead of the project taking place. Beginning with a desk based study to identify loading configurations for the four components, and the most suitable route on which to transport them, our Team discovered early in the planning process that this would not be a straightforward project. After undertaking a visual route inspection our Project Managers catalogued the entire proposed transport course for further investigation to ensure the 40m (L) x 4.6m (H) 4.5m (W) loaded combination would successfully navigate the landscape.

With numerous tight bends and turns identified along the route several swept path analysis reports using Ordnance Survey Mastermap Data had to be completed. The largest loaded component, the machine can, featured a 29m rigid length, and utilising these dimensions allowed our team to mimic the trailer and vehicle’s behaviour at select parts of the route to identify any amendments to the surrounding topography or manual steering requirements to ensure safe passage.

On exiting Immingham Docks the 27 mile route passed through South Killingholme and along the A180, joining the A15 before taking a tight right turn on to the B1206 towards Barrow. Once in Barrow Upon Humber, in order to facilitate an extremely tight right turn as identified in the swept path analysis reports, the Steersman had to employ the manual steering capabilities of the self-propelled power boost module.

On approach to the Thornton Road and College Road crossroads, and again as highlighted in the swept path analysis reports, our Team faced another extremely tight turn, this time on the left. Prior to the commencement of the project our Teams had identified required modifications to this junction and had arranged for the removal of five sections of Amco barrier, one concrete sign post, a blind summit sign and the complete removal and reduction of an entire splitter island to the same grade as the road level. Having undertaken these modifications, and also having resurfaced the Northeast side of the junction with stone 3 metres from the kerb, our Team began navigating this section of the route.

At this point the Driver and Steersman disconnected the air, hydraulic lines and drawbar coupling between the tractor and trailer allowing the tractor unit to be disconnected. Using a remote control unit the self-propelled module could then power the complete trailer, including steering, suspension and braking, allowing the Steersman to successfully manoeuvre the loaded cargo around the tricky bend. Following the uncoupling of the tractor unit the trailer was then manually steered by the Steersman past the junction to a clear distance, the cargo was then reversed right providing a clear straight ahead run over the crossroads. After negotiating the junction the trailer was re-coupled with the tractor unit for the onward journey.

Having completed this intricate manoeuvre the convoy continued on its designated route. On approach to Goxhill parking restrictions had been put into place on both sides of the residential area for approximately one mile. Tree pruning had also been undertaken to provide a clear envelope of 5m in height and 5.5m in width to enable safe navigation. 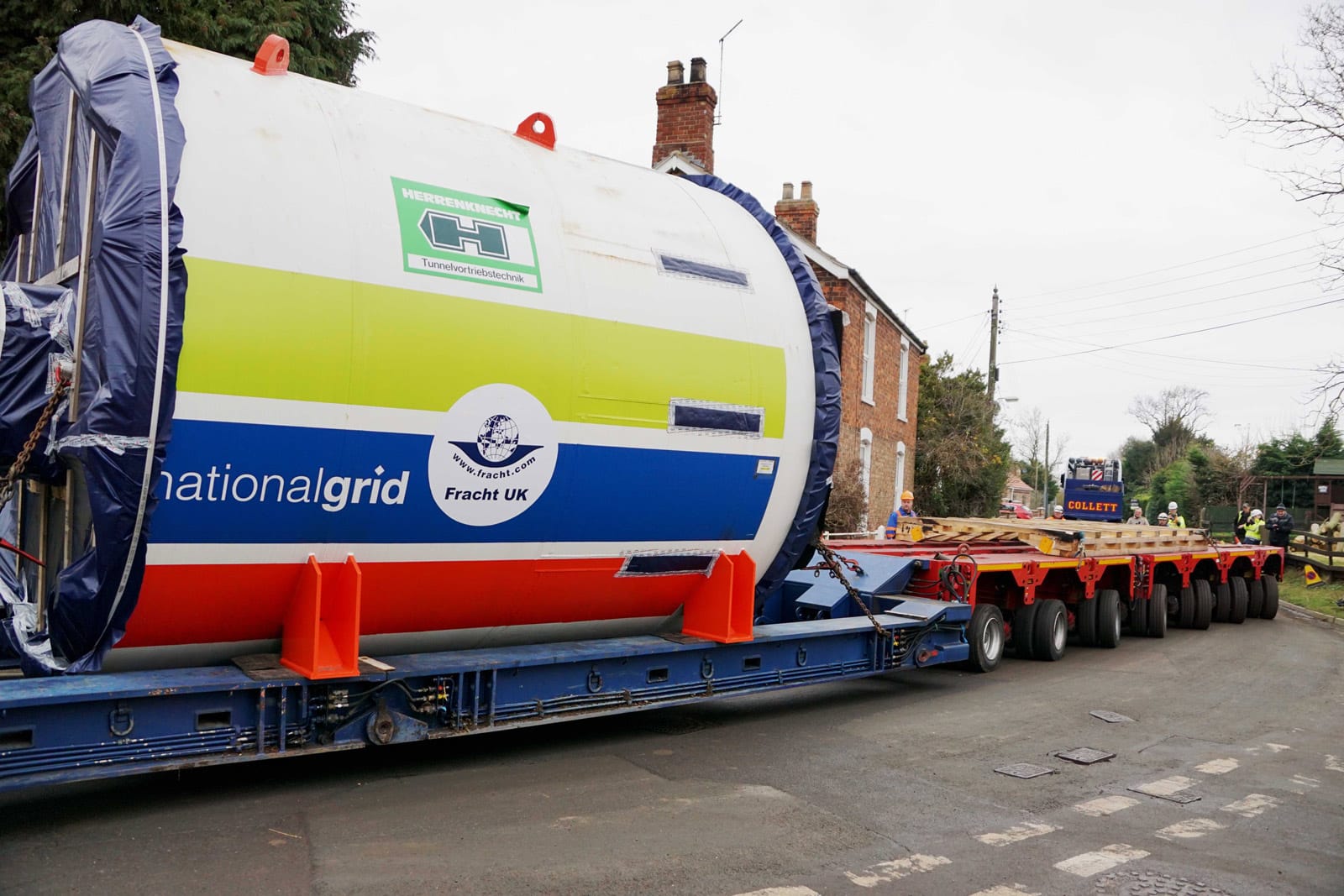 On immediate exit from the traffic restriction zone we were required to cross Ferry Road Rail Bridge. Here, the trailer’s hydraulic suspension was raised to allow the low deck to safely clear the crest, whilst the entire combination was manoeuvred at crawl speed in the centre of the carriageway until clear of the structure.

To navigate the exit from the village of Goxhill through Goxhill North End, parking restrictions again has been implemented on both sides of the road and each of the three smaller loads, the cutter head, shield and tail shield were expertly navigated through this residential area. For the heaviest load, the 95 Tonne machine can, our Team once again had to employ manual steering capabilities, disconnecting the tractor unit and utilising the power boost module to manoeuvre the combination into position for the approach to the delivery site.

The final approach to the delivery site also required extensive modifications to allow the loaded vehicles to safely navigate to their destination. Temporary road signs had been removed in preparation, any loose items had been cleared from the site and five separate areas of grass verge had been resurfaced. With the average 2.8m width of East Marsh Road falling below the 3m axle width of the loaded components our Teams had in place 30m of plating from the junction onwards and a following 30m of hardcore to ensure the vehicle and trailer’s stability on this narrow section of track. With the entrance to site having been widened and the site gates dismantled each load was safely delivered to the Humber Gas Pipeline Project National Grid Site.

Three and a half hours after departing from the Port of Immingham the first two loads, the cutter head and the shield, completed the 27 mile journey under Humberside Police and private escort arriving safely on site by mid-afternoon. After unloading the two cargoes both of the empty trailers left the site, still under police escort due to the size of the road, and were returned to our Heavy Lift depot in Goole. The following day, the loaded tail shield and machine can left the port at 9:30am to replicate the journey to site.

Over three days all four cargoes were unloaded from the vessel and safely transported to the Humber Gas Pipeline Project National Grid Site in Goxhill. Once assembled the tunnel boring machine Mary will be used to build a replacement high pressure gas pipeline from Goxhill to Paull housed within a tunnel underneath the River Humber. The pipeline will replace the existing one which lies on the riverbed and is due for completion in 2019, once built it will be the longest gas pipeline in a tunnel, inserted in a single string in the world. 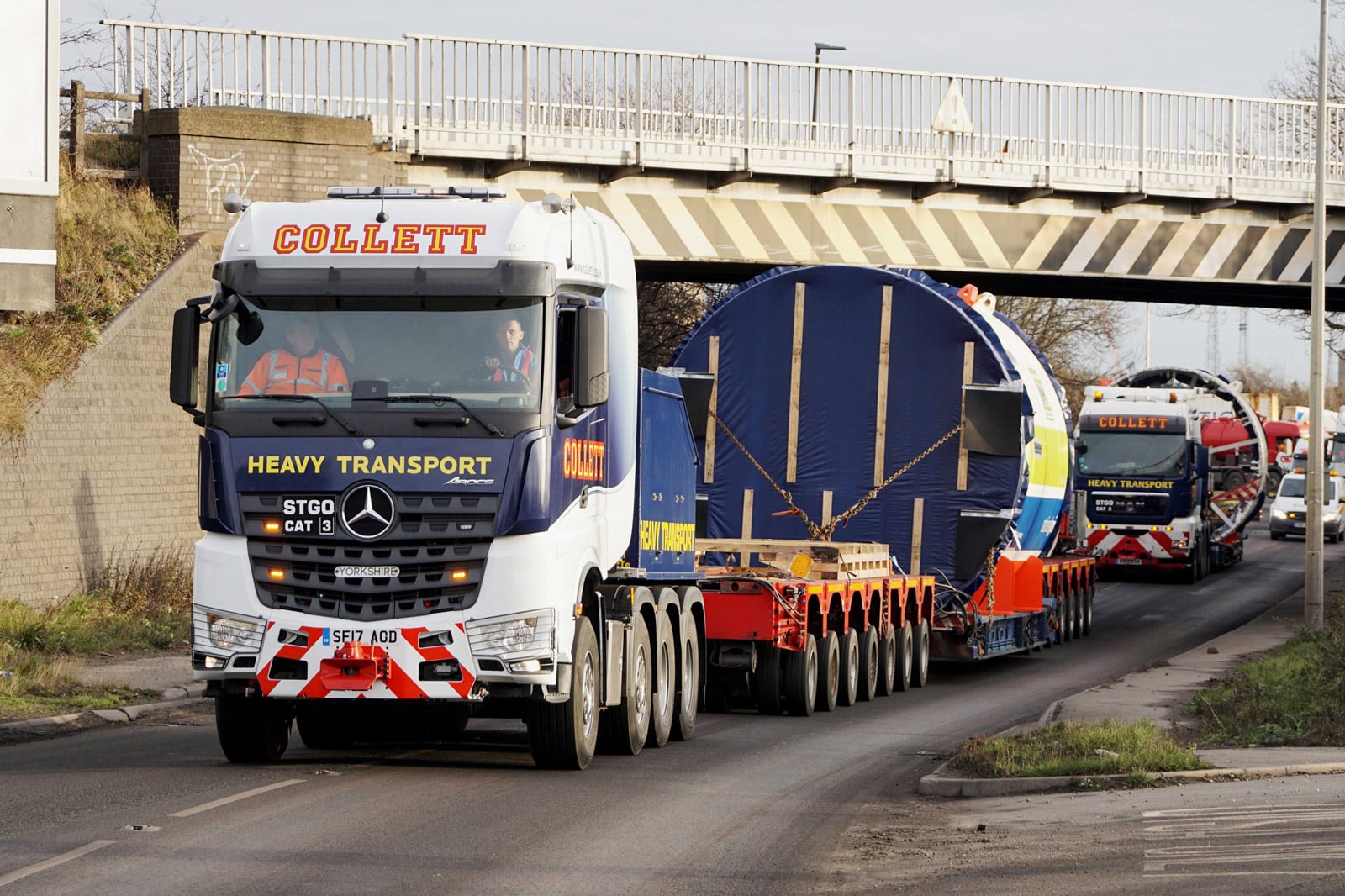