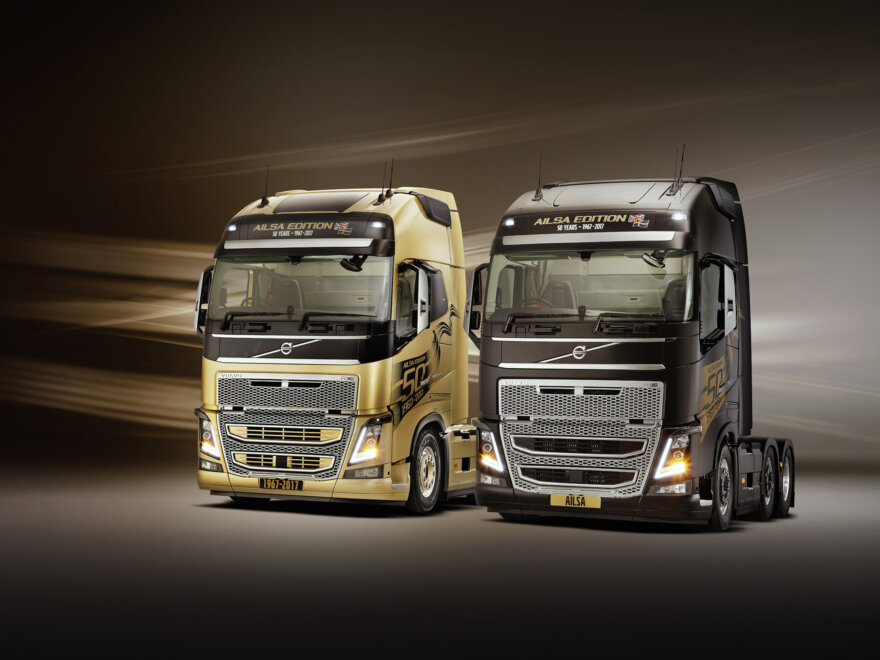 The Ailsa name is significant because, although the company traded as Ailsa Trucks, the name was only ever applied to one product, the locally-developed Ailsa Bus, which was built at Irvine. The ‘Ailsa’ Edition is therefore the only truck to have ever carried the name.

Fifty years ago, via their company ‘Ailsa Trucks’, Jim McKelvie and Jim Keyden introduced the revolutionary Volvo F86 to a market, that the former knew, from his previous experience as an operator of a fleet of over 350 HGVs, was being hampered by the lengthy waiting lists, often for up to two years, for other makes of truck.

As a customer and a haulier, he also believed that UK manufacturers of the time were complacent with respect to sales and aftercare. An important aspect of the early years of Volvo in the UK and part of that vision of looking after its customers, is that the dealer network and training was established before the trucks arrived.

Likewise, following his time at Pressed Steel at Linwood, where the bodies were made for the P1800 sports car, Jim Keyden knew of Volvo’s relentless focus on product quality. Together, Jim Keyden and Jim McKelvie shared a vision for Volvo that they turned into reality and so began a successful partnership with customers and dealers that has since delivered over 200,000 trucks to operators in the UK.

Commenting on the ‘Ailsa’ Edition, Douglas, the son of ‘Ailsa Trucks’ founder Jim Keyden said that: “The choice of the name Ailsa honours the memory of my father and Jim McKelvie in their vision to succeed with Volvo, from the earliest days with the F86, by looking after their customers. Fifty years ago, they were one of the first to focus on helping their customers keep their trucks on the road and earning. To my father and Jim McKelvie, through the reliability and safety of the F86 and subsequent trucks, Volvo delivered value. What is more, the customers, distributors and employees were ‘family’. I don’t think you can do better than that.”

The F86 (the ‘F’ stood for ‘Forward Control’) with its steel-framed tilting safety cab, laminated windscreen, six-cylinder TD70A diesel engine developing 185/195bhp (DIN/SAE), 9-speed synchromesh gearbox, full air brake system and all new ‘System 8’ driveline, was ahead of its time – and available for delivery much more quickly than other makes – and all for a purchase price in 1967 of around £3,500, backed up by a 12-month parts and labour guarantee.

Ailsa Edition
In 2017, Volvo Trucks is celebrating the 50th anniversary of the first entry proper of Volvo trucks to the UK market with the superb ‘Ailsa’ Edition.

This is a strictly limited edition with a production run of just 50 black on gold – or gold on black – FH 4×2 and 6×2 tractor units. The ‘Ailsa’ Edition focuses on Volvo’s class leading technology and safety equipment in the FH16-750 and the FH, which is equipped with the 13-litre engine rated at 540hp. With Dynafleet Services, with messaging included, this truck meets both driver and fleet needs.

Volvo’s place at the pinnacle of the league table for useable power and torque goes back 30 years to 1987 and the launch of the first F16 and its new ‘straight six’, 16-litre 470hp engine – another truly iconic Volvo. Now, the FH16-750 with the D16K750 engine produces 750hp and 3,550Nm of torque between 900 and 1400 rpm – meaning that the full spread of torque is available for use, right from the moment first gear is engaged. The result is outstanding driveability and excellent fuel performance, even at high gross weights.

The FH-540 ‘Ailsa’ Edition is fitted with the I-Shift Dual Clutch. This pays homage to the advanced driveline which has been at the heart of every Volvo Truck since the F86. Launched in 2014, the I-Shift Dual Clutch ensures that there is no interruption in power and torque delivery when changing gear. I-Shift Dual Clutch is the ultimate in driver aids for slick changes that ensure the truck’s kinetic energy is fully used to maintain forward road speeds, including on gradients.

Like the synchromesh gearbox in the F86 of fifty years ago, the I-Shift Dual Clutch is just as revolutionary in the way it helps the driver focus on driving and not on managing gear changes. In fact, with less than 5% of customers opting for a manual transmission nowadays, Volvo are saying ‘goodbye’ to the synchromesh manual gearbox this year, as I-Shift has become the gearbox of choice.

The Ultimate Drivers’ Machine
Each ‘Ailsa’ Edition has a very special, ‘custom’ interior upholstered in black and gold leather that complements the exterior with luxurious detailing that includes gold stitching and the specially designed 50th Anniversary ‘Ailsa Edition’ logo.

Floor and engine tunnel mats are finished in gold too. Drivers get Volvo Dynamic Steering (which reduces steering effort by up to 85%), I-Park Cool stationary Air Conditioning, I-See Predictive Cruise Control, TomTom navigation and the latest Media Package for streaming, as well as the fullest possible list of home comforts such as a microwave, television and fridge freezer, together with the Personal Protection Package, which includes a security box, laminated door glass and an alarm.

To support the ‘Ailsa’ Edition, the truck includes a three-year full Repair and Maintenance contract within the price. The aim today being to maximise uptime as opposed to the message of 50 years ago which was all about minimising down-time.

Volvo Trucks’ Head of Product Management John Comer says that the ‘Ailsa Edition’ black and gold design cues and influences hark back to the days of Team Lotus in the 1970s and the Swedish drivers Ronnie ‘Super-Swede’ Peterson and Gunnar Nilsson. The discreet ‘Ailsa Edition’ door badge showing both the Swedish and Union flags, highlights the long and mutually respectful relationship enjoyed for so long by Sweden and the UK.

As John Comer explains: “The ‘Ailsa Edition’ project started back in summer 2016 and was driven by Cab Product Planner Peter Lindgren in terms of supply and the agreement on the use of the Ailsa name as part of the Volvo brand canon. With its overwhelming importance on what would become Volvo’s future customer and driver focused direction in the UK, there was really only one name we could choose for this 50th anniversary truck and that was the ‘Ailsa Edition’.”

“We would also like to thank the 50th Anniversary Project Design Team in Gothenburg, led by Design Director Rikard Orell and Senior Designer Nigel Atterbury, for delivering a tremendous, attractive and uniquely sensitive design solution for this landmark, limited edition truck.” He concluded.