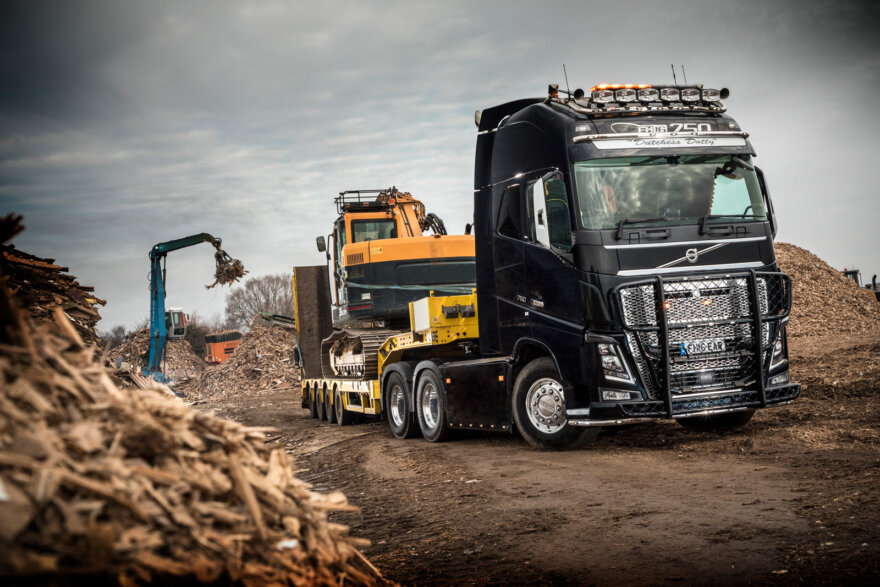 “I specifically bought the FH16-750 to go on landfill work,” explains James. “The double drive helps because vehicles are liable to skid. Tandem Axle Lift is used when the truck is running empty so we save on diesel. The latter feature is a pioneering development.”

In order to celebrate the milestone anniversary further, James requested the new truck be given a customised makeover and Tranz Tech in Wisbech were called to tastefully customise the truck.

“Tranz Tech fitted the highway bars, the bespoke chassis infill, side skirts and all the work lights, front and back,” reports James. “They also introduced me to TruckMax, who fitted the exhaust. I’m very pleased with it, Tranz Tech have done a brilliant job. My driver Wayne is over the moon as well. He says everywhere he goes people want to take a photo.”

The new vehicles join five existing Volvo lorries in East Anglian Resources’ fleet and for the tough work they will be involved in, James is convinced they are second to none.

James bought his first truck in 1997 – a Volvo F12 – and the latest purchase reflects his continued confidence and respect he has in the brand because East Anglian Resources has also ordered four Volvo FH-500 tractor units on contract hire for its walking floor transport operations.

“Volvos are the hardiest lorries I have ever known. Our work is very demanding and I believe they are up to the job. I don’t think any other vehicle will stand up to the savageness of what we do,” he says. “I also believe the Version 4 Volvo FH is the best truck on the road. They are definitely the most comfortable and, in my opinion, the strongest in the marketplace.”