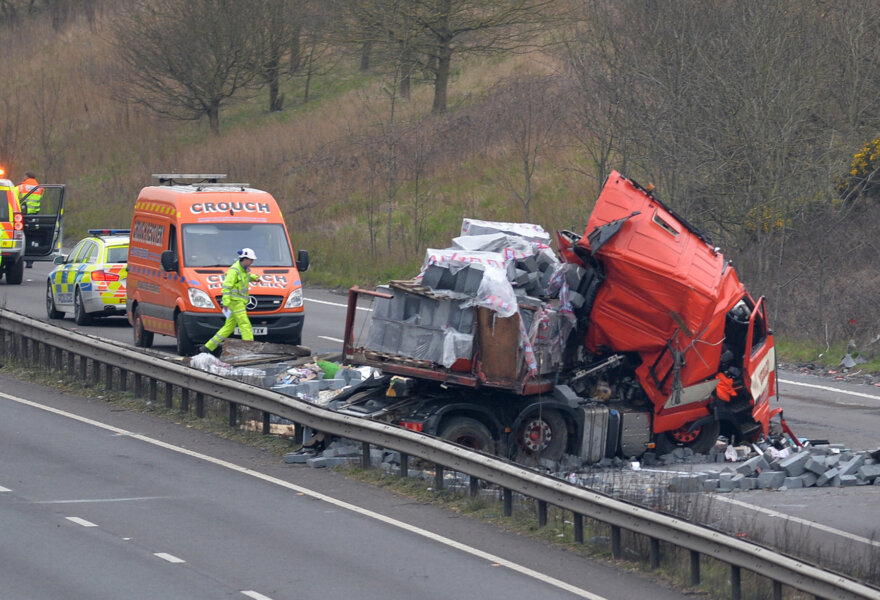 Paul Cooling, a driver for J. Medler Haulage of Norwich, has attributed his wellbeing to the design and safety features incorporated in the Volvo cab of the FH tractor unit he was driving following a horrific road traffic accident on 22nd March 2016.

The accident, which happened on the eastbound carriageway of the A14 near Welford in Northamptonshire, saw the nearside of the cab sustain heavy impacts to both front and rear as Paul jack-knifed against the central reservation on what is arguably one of the UK’s busiest sections of dual carriageway.

“After the initial impact I remember trying to jack-knife so as not to cross the central reservation,” says Paul. While his actions almost certainly prevented him from crossing into on-coming traffic, they also meant the cab took a significant blow to the rear from his own trailer, which at the time was fully loaded with Thermalite blocks.

“I have to say I was absolutely amazed at the integrity of the cab after such a big accident,” says Paul. “Before this accident I really liked Volvo trucks. Now I love them! They’re the best truck in the world and I honestly believe I’m still here thanks to the safe design and build quality of Volvo.”

The accident forced the closure of the A14 in both directions for several hours. The westbound carriageway was shut to enable the air ambulance to land in order to attend to Paul.

Paul returned to work just three weeks later with a scar running from above his left eye up across his forehead the only sign of the horror that struck that afternoon. “I’m as fit as a fiddle now,” he says. “I had thirty stitches to tidy up the wound to my head, but the scar’s already healing over and I’m just glad to be back at work.”

Paul’s boss and Managing Director at J. Medler Haulage, Dean Medler adds: “I have to say I was surprised that Paul walked away with comparatively minor injuries after such a serious accident. We were all delighted when he returned to work within just three weeks. I believe this accident has reassured me and our drivers that Volvo trucks are indeed the safe choice and I am therefore glad that our entire fleet bears the iron mark!”

“Despite the severity of my accident, the cab of the nine-year-old Volvo FH stood up to the impact sufficiently well that, once my seatbelt was released, I was able to exit the cab via the offside door virtually as normal,” says Paul. As for advice following his accident he adds: “Always double-check that you’re wearing your seatbelt properly and drive a Volvo!”

Mike Corcoran, Commercial Director at Volvo Trucks UK & Ireland, said:” Ever since our first trucks were built over 80 years ago, we have focussed on safety and the driver. Providing a safe working environment for the professional driver is one of our most important objectives when designing and building Volvo trucks of all types. In line with this objective, we are pleased to hear that Paul credited our truck and the safety features of our cab for his wellbeing following this particular incident.”