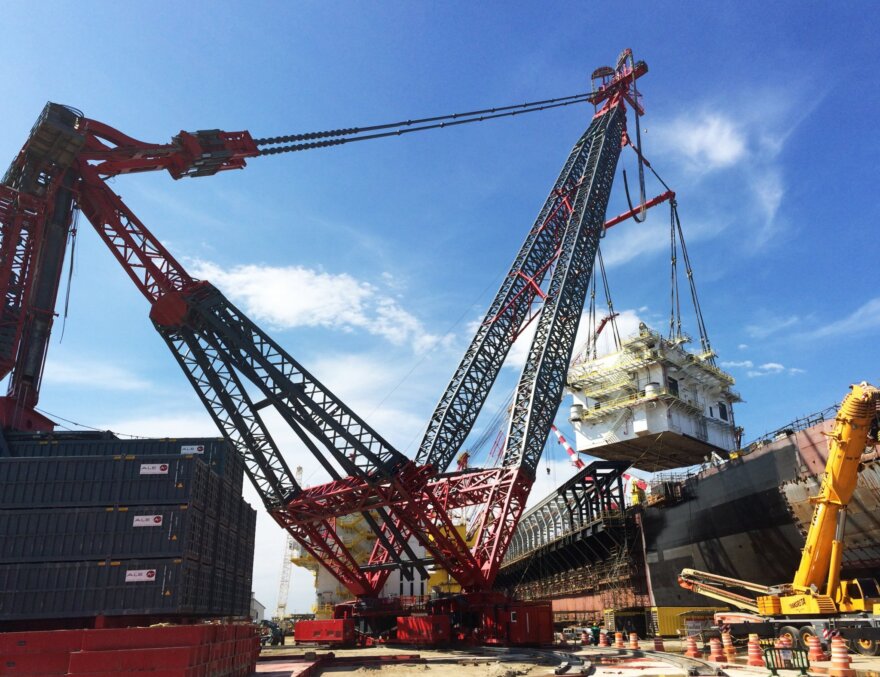 Short mobilisation and efficiency were the key requirements of a transportation and installation contract recently undertaken in Rio de Janeiro by ALE HeavyLift..

The remit was to install an accommodation module which weighed1,538t and a service module weighing 702t on the Petrobras P-74 FPSO sited in the Petrobras shipyard. The challenge was to achieve this in the shortest possible timescale in order to maximise the cost efficiency of the project.

“We had an operational window of three months,” said ALE’s Sales Manager Giovanni Alders. “Achieving this would mean we could save two months of costs for our customer”.

The engineering solution was the use of the AL.SK190 crane, one of a range of cranes owned by ALE which also includes the AL.SK350, the world’s largest capacity land based crane. The AL.SK190 occupies a footprint of just 35m x 55m and lifts up to 4,300t, with a maximum boom height of almost 200m, and a load moment of 196,000tm. Its 118.5m main mast was positioned to reach and lift pieces from one single position without the need for the crane to be repositioned or the FPSO to be removed from the dock.

The AL.SK190 was containerised and transported by ship from the Middle East, a journey which took 30 days. The crane performed three lifts over a ten day period to install the accommodation module, service module and the helideck. Operating from a fixed position minimised the ground space required, and enabled construction work to go on around the base. ALE completed a range of site moves using a total of 56 axle lines of SPTs.

“Using the AL.SK190 crane saved up to two months in downtime as our customer did not have to take the FPSO out of the dock”, said Giovanni. “The actual lifting time to install the two modules was reduced to two weeks and modifications on the FPSO could still go ahead whilst the crane was being assembled and disassembled.”