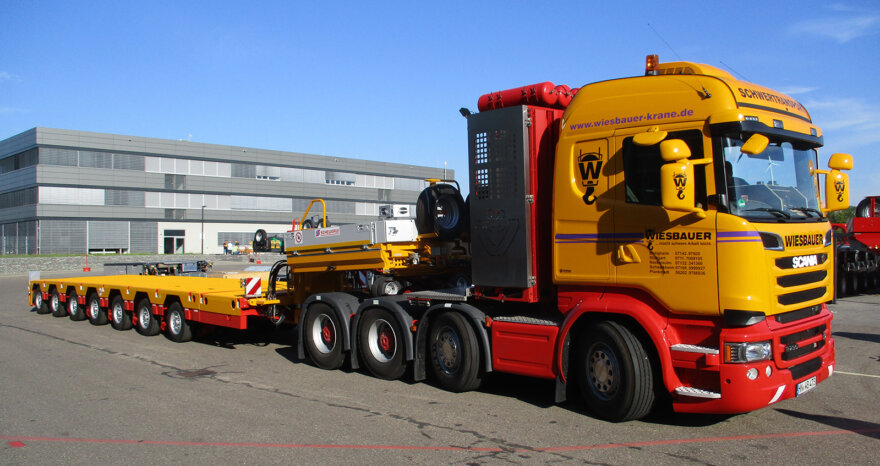 For more than fifty years now, the Wiesbauer Crane Company in Bietigheim-Bissingen has been active in the crane and heavy-duty transport sector. This is, putting it mildly, enough time to know what is important when it comes to buying a trailer. The Scheuerle-Nicolas Superflex convinced the Swabian-based heavy load specialist when the question arose regarding the acquisition of an additional vehicle which has maximum operational versatility together with an optimum payload-dead weight ratio.

“With a telescoped length of seven metres and an extremely low dead weight, the Superflex offers a payload up to four tonnes greater than vehicles from other manufacturers,” said Mathias Hobusch, project engineer at Scheuerle.

The Scheuerle-Nicolas Superflex has also set new standards, as the name suggests, in terms of flexibility. It is therefore possible for vehicles with a single telescoping beam to shift the two front axle lines in 500-mm increments between the gooseneck and the rear bogie unit. For vehicles with a double telescoping beam, the axles can also be moved to the gooseneck as well as to the rear bogie. Through this innovation, it is possible to adapt the vehicle to suit the respective position of the payload centre of gravity and to optimally utilise every axle line. If two axis lines are not needed, they are removed – without the use of any tools. “This is still unique in the market and saves on both time and money,” added Jochen Wiesbauer, co-owner and managing director of Wiesbauer Cranes.

The Scheuerle-Nicolas Superflex is available in the standard version (non-telescopic) as well single telescoping and double telescoping versions with 245 tyres. In a retracted position, the extension supports close flush with the platform and can be reinserted to form stable stanchions for securing the load. The Scheuerle-Nicolas Superflex is also appreciated for the high number of foldable lashing rings, the completely demountable side walls of the gooseneck and the various, robust and easy-to-operate ramp systems.