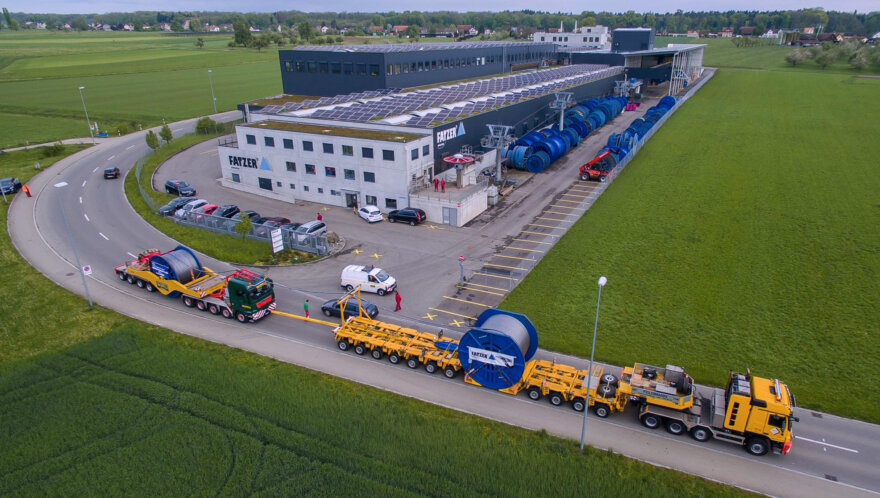 For walkers and winter visitors, there are two ways to ride up to the summit of the Zugspitze, Germany’s highest mountain – from the Tyrolean side in Austria or from Garmisch-Partenkirchen on the cable car called the Bayerische Zugspitzbahn, where four new track ropes were installed in May and June of this year. Each of these steel wire ropes is 4900m in length, 72 mm in diameter and has a specific weight of no less than 29.75kg per meter for an impressive total weight of over 145tons.

The track ropes, which now hold the record as the world’s strongest cable car ropes, were manufactured by Fatzer AG Wire Ropes of Romanshorn in Switzerland. That means they had to be transported to the customer over a distance of more than 200km. Given the challenging size and weight of the cargo, the Swiss Feldmann Pneukran + Transport AG had no alternative but to develop a one-off solution for the vehicle configuration. “We started off by having special rope drums made so that the rig could travel along the autobahns,” says Marcel Guilbert, Manager Transport Operations at Feldmann AG. “In view of the very considerable weight of the cargo, for all four trips each rope was divided up between two drums on two vehicles in a push-pull configuration for the full distance of the journey. With an overall rig length of more than 54m, this was a challenging mission on certain sections of the route.”

The front drum was designed for a maximum diameter of 4.5m as the complete wire rope had to be wound onto it at the destination prior to installation. In order to transport the drum without exceeding the overall legal height limit of 4.3m, the transport experts designed a solution to “trim” the top segment of the drum. At the same time the Feldmann team working in collaboration with Goldhofer’s design engineers, performed real pioneering work with the development of the world’s first dedicated wire rope drum bridge – with a payload capacity of 100tons.

Marcel Guilbert: “The bridge design was my idea and was perfectly implemented in cooperation with Goldhofer – a really unique solution, which has definitely not been built in this form before.” For the configuration of the front transporter with the rope drum bridge, the Feldmann team chose a Goldhofer STHP/ET 4+7. Even in the heavy-duty module department, this vehicle is considered a real workhorse and is mainly used for long-distance operations. On this type of trailer, Goldhofer’s proven pendular axle technology contributes to a maximum axle load of 23tons. The rear vehicle for the smaller rope drum was provided by the Wipfli Transporte company as subcontractors. Once the ropes had been apportioned and loaded on the two transporters, the first journey could begin on a route from Switzerland to Germany via Liechtenstein and Austria.

“From start to finish, there were a number of roundabouts to be negotiated. With a total length of the rig of over 54m that was not always easy, but the hydraulic axle suspension system on the THP/ET did a great job. In Schaan (Liechtenstein) the route led through the centre of the village, and a number of road signs had to be taken down,” says Marcel Guilbert. The last leg of the journey included a gradient of over 14 percent. In spite of the wet road, the 252-ton rig took that in its stride, and the first rope arrived at its destination without any incidents. The other three journeys all went off smoothly, too. Marcel Guilbert’s conclusion: “We are a little bit proud of the fact that we were able to develop a completely new solution in collaboration with Goldhofer for this operation. The industry insiders, and also the police officers involved, were pretty surprised to see the “little” Swiss turn up with such a great idea. Looking back, I can only say, ‘Excellent job, I would do it just the same way the next time.”