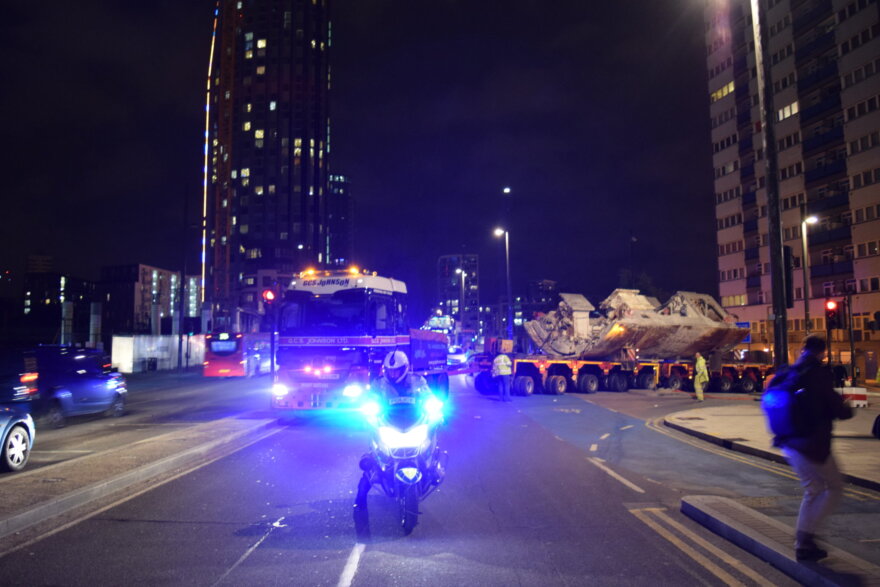 Following the completion of the Lee Tunnel Project, WWL ALS embarked upon returning TBM ‘Busy Lizzie’ back to the manufacturer, Herrenknecht.

The contract commenced in March 2014 with the initial movement of standard trailers, then progressed into the larger TBM sections as detailed below.

Due to the sizes of the TBM sections, the Highways Agency would only grant permission to Tilbury Port. As part of the planning process, extensive route surveys were carried out by WWL ALS from Abbey Mills Pumping Station to Tilbury Docks prior to movement.

To assist with the movement, the following services were utilised:

After many months of planning, transport was carried out over 3 separate weekday evenings, with the six TBM sections self-unloaded onto stools & consolidated at Tilbury Port.

WWL ALS contracted a Liebherr LG 1750 crane to lift the six components to a suitable vessel for onward shipment to Rotterdam. Due to low water levels along the River Rhine, the TBM sections were lifted, but onto a river barge.

The barge safely arrived at the heavy lift terminal in the close proximity to the consignee, with the final leg of the journey covered by road to the manufacturer.

The Lee Tunnel is part of the Thames Tideway Scheme. Running from Abbey Mills Pumping Station to Beckton Sewage Treatment Works under the London Borough of Newham.